Andy Murray may have been exhausted after his Olympic tennis gold medal match, but he still had enough left in the tank to put John Inverdale in his place after a fairly embarrassing gaffe. 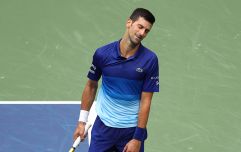 Novak Djokovic will miss US Open due to vaccination status

END_OF_DOCUMENT_TOKEN_TO_BE_REPLACED

Murray retained his Olympic title, the first male tennis player to achieve the feat. Inverdale congratulated Murray on being "the first person ever to win two Olympic tennis gold medals."

However, Venus Williams has won five Olympic medals, four gold and a silver, and her sister Serena has won four Olympic gold medals.

The BBC presenter was corrected by Murray, and it made for an awkward exchange. 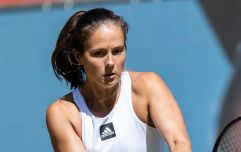 END_OF_DOCUMENT_TOKEN_TO_BE_REPLACED

Inverdale is no stranger to an on-air gaffe.

After Marion Bartoli won Wimbledon in 2013, Inverdale said live on BBC radio: "Do you think Bartoli's dad told her when she was little 'You're never going to be a looker? You'll never be a Sharapova, so you have to be scrappy and fight."

He also seems to be Steve Redgrave's bad books.

popular
Tourists left 'squealing' as thousands of venomous crabs invade UK beach
Runner finishes last in 400m race as penis keeps falling out of shorts
Inbetweeners star Joe Thomas has been in a relationship with his co-star for over 10 years
Paul Scholes slams 'shambolic' Manchester United following Brighton defeat
Roy Keane cracks Cristiano Ronaldo joke during Man United loss to Brighton
Archie Battersby's family demand urgent review as 'no family should go through this'
The JOE Friday Pub Quiz: Week 306
You may also like
News
How much Nick Kyrgios has been fined for swearing in front of Prince George at Wimbledon
Life
Woman accused of downing '700 drinks' and 'distracting' Kyrgios at Wimbledon breaks silence
Sport
Wimbeldon protestor claims he was 'attacked' by security and 'smashed into a wall'
Sport
Nick Kyrgios complains about 'drunk' spectator during Wimbledon final
Sport
Novak Djokovic says he has 'magic potion' inside water bottle
Next Page