'14 years later, the pain is still the same'

A father and son have recreated an iconic snap from 14 years ago, after their beloved Sheffield United were once again relegated from the Premier League. END_OF_DOCUMENT_TOKEN_TO_BE_REPLACED

The original photo was taken in 2007 as Sheffield United suffered relegation heartbreak on the final day of the Premier League season after a 2-1 defeat at home to Wigan. Suffice to say that this season hasn't seen the Blades get anywhere near the ten league victories they racked up in 2006-07, as they been relegated before the final month, let alone the final day.

However as the two will attest, it doesn't make it any easier to come to terms with. So the father and son duo thought they'd have some fun by recreating the heartbreaking photo of a son crying into his dad's arms as the pain that football can cause hits him.

Except of course, the son in question is a little bit bigger now.

Whilst they couldn't get in to the ground to truly mirror the pic, it's a really solid effort. Their both looking in the same way they were in 2007, with the same emotions of despair and heartache etched across their 14-years-older faces. The dad is even wearing the same coat from that fateful day in 2007.

You asked. I delivered. 14 years later, the pain is still the same. 😭 pic.twitter.com/JROqP1XaAr

And although the emotions probably aren't quite as raw in the recreation as they were in 2007, it seems to have struck a loving chord with a lot of people, racking up almost 40,000 likes at the time of writing. 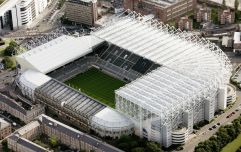 END_OF_DOCUMENT_TOKEN_TO_BE_REPLACED

One user commented: "Supporting your local club is painful sometimes but we have shown that the game belongs to us. Much love from a Palace fan. "

Another said: "Football fan it’s a shxt life cost loads. Get cold and wet. Look at 90 mins of crap. Crap drink crap food!! Win nothing. We love it the crack the banter the excitement. Just the a win. Nothing better"

Meanwhile a third wrote: "Brilliant pic, from a Magpie, if I knew football was going to be so painful, I’d of started watching Cricket! It’s tough being a northerner"

It will get better lads. And I'm sure that Blades fans across that Sheffield United fans across the land must be taking some satisfaction from the fact that their city rivals Wednesday are set for a relegation of their own.

popular
Ava White, 12, dies after Liverpool stabbing - four boys aged 13 to 15 arrested on suspicion of murder
Tobey Maguire Spider-Man spotted in No Way Home merchandise
Over 200 kilos of cocaine with Liverpool FC branding seized
The JOE Friday Pub Quiz: Week 271
A definitive ranking of every swear word from worst to best
Pro Volleyballer spends £590K believing he was dating supermodel Alessandra Ambrosio for 15 years
Here's how to see who's been taking screenshots of your Instagram Stories
You may also like
Social Media
Asda staff tried to kick out woman for being 'basically naked'
News
Woman 'falls down mountain' and leaves hilarious review about her 5-star leggings
Entertainment
Jeff Bezos responds after girlfriend filmed thirsting over Leo DiCaprio
Politics
January 6 rioter who said she's 'definitely not going to jail' sent to prison
News
Elon Musk wipes $40bn off Tesla value with single tweet
Next Page