Roy Hodgson has been laying low since stepping down as England manager over the summer.

Hodgson's name has not been mentioned in connection with too many jobs, but that could be about to change in a big way.

END_OF_DOCUMENT_TOKEN_TO_BE_REPLACED

The Daily Mirror reports that the veteran boss has been approached by agents tasked with attracting big-name bosses to the Chinese Super League, and the sums of money being quotes are absolutely massive.

Hodgson could more than double his £3.5m-per-year England salary, the paper claims - suggesting it's not just players like Brazil international Hulk and former PSG man Ezequiel Lavezzi who earn the big bucks in the far east.

Premier League winner Manuel Pellegrini is one of the managers currently involved with a Chinese top-flight club, having taken over at Lavezzi's Hebei China Fortune FC after leaving Manchester City over the summer. 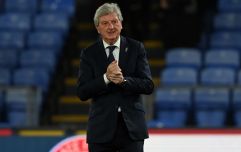 END_OF_DOCUMENT_TOKEN_TO_BE_REPLACED

And he is not the only one: former Chelsea manager Luiz Felipe Scolari is in charge of league leaders Guangzhou Evergrande, while Champions League contenders Shanghai SIPG have another former England boss at the helm in the form of Sven-Göran Eriksson.

If Hodgson is ultimately tempted to take a job in the Chinese Super League, we wonder if any England players might be tempted to follow him in the January transfer window. Not naming any Waynes...err, I mean names.