Kyle Lafferty looks set to seal a return to Ibrox, six years after the Northern Ireland international's first spell as a Rangers player came to an end. 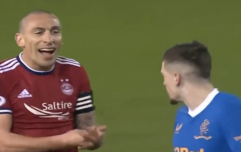 END_OF_DOCUMENT_TOKEN_TO_BE_REPLACED

Sky Sports report that a fee for the striker has been agreed with Hearts, who he joined last year. It's expected he will now have a medical with the Glasgow club. Personal terms are not thought to be an issue.

The deal is expected to be finalised by the close of play on Wednesday, with Lafferty expected to be available to feature in Rangers' Europa League first leg play-off tie against FC Ufa on Thursday.

The 30-year-old has been linked with a move to Rangers for the last few weeks after Hearts turned down a £200,000 bid for him earlier in the month.

Lafferty scored the only goal of the game for Hearts in their recent win over champions Celtic and manager Craig Levein has since confirmed that discussions with Rangers about a possible transfer were ongoing.

Lafferty first played for Rangers between 2008 and 2012, helping them to three Scottish titles, two League Cups and a Scottish Cup during that time. He's scored 19 goals since arriving at Tynecastle last year following spells at Sion, Palermo and Norwich City.