Liverpool and Egypt talisman Mohamed Salah has sparked outrage by posing for a photograph alongside controversial Chechen leader Ramzan Kadyrov.

Salah and Kadyrov were pictured together during a tour of a Grozny stadium earlier this week and many have criticised the apparent use of a popular footballer as a propaganda tool by a man who has been accused of "torture and extrajudicial killings".

It's reported by the Telegraph that Salah was relaxing in his hotel room on Sunday due to the fact that he was unable to train with his injured shoulder when Kadryov is said to have reached out to the forward and requested his company at the stadium.

But given the accusations against Kremlin-backed Kadyrov and his controversial stance on homosexuals, several human-rights campaigners have ridiculed the fact that Kadyrov managed to align himself with Salah to push his political agenda.

This @marcbennetts1 image of Mo Salah with Ramzan Kadyrov is as good an illustration of the World Cup as a political/propaganda tool as you’ll get. Proximity to these players shows power, boosts profile, confers some form of legitimacy. pic.twitter.com/DcTyRzldDd


Anti-discrimination group Kick It Out have released a lengthy statement on the matter in which they request that several questions are answered. 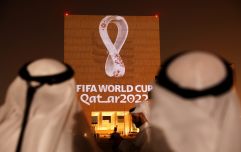 END_OF_DOCUMENT_TOKEN_TO_BE_REPLACED

The statement reads: "Kick It Out and Pride in Football are extremely disappointed to see football being exploited for political propaganda by the leader of a region with a horrendous record on human rights, particularly towards the LGBT+ community. No footballer, particularly one as distinguished and internationally-recognised as Mohamed Salah, should be used for this purpose.

"For both organisations, this incident raises a number of questions:

1. Why did FIFA ignore the concerns raised by groups such as Fare Network, who have already spoken out about the treatment of the LGBT+ community in Chechnya and the likelihood that Ramzan Kadyrov would exploit this opportunity to gain political capital?

2. Why did the Egyptian FA choose to base themselves in Chechnya, a region where last year Human Rights Watch reported that gay men were detained, tortured and subject to a purge, and where LBT women are in daily fear for their lives?

3. Why did FIFA allow the Egyptian FA to base themselves in Chechnya, just over a year since the governing body published a ‘landmark’ Human Rights Policy which was supposed to strengthen its commitment to the protection of internationally recognised human rights?

4. Why did the Egyptian FA allow Kadyrov to visit their base, a leader who last year called the LGBT+ community ‘devils’ who are ‘not people’ and need to be removed from Chechnya to ‘purify our blood’?

5. Why did Mohamed Salah and those advising him not consider the message his appearance alongside Kadyrov would send to LGBT+ people across the world, including Chechnya, Russia and Liverpool itself?

"Ultimately, the widely-publicised photos are a reminder that football and sport do not exist in a vacuum. Players, Football Associations and international governing bodies must always be aware that their actions can influence wider society and in turn, the rights and lives of minority groups.

"Ramzan Kadyrov has already secured a PR victory for his domestic audience, but it is not too late for Mohamed Salah, the Egyptian FA, FIFA and everyone in football to learn from this incident. We must always do everything we can to prevent the game being exploited by human rights abusers, and continue to send a clear message that the LGBT+ community are an integral part of football and wider society."

You may also like
Sport
QUIZ: Can you name the three men to have pulled off this rare World Cup feat?
Sport
Five years on, Germany's demolition of Brazil in the World Cup remains as brutal as ever
Sport
QUIZ: How well do you remember the 2018 World Cup?
Sport
Scotland defeat Ireland in final of darts World Cup
Football
These are the top HABs (Husbands and Boyfriends) at the 2019 World Cup
Next Page