That dry Scottish wit is quick as you like

John McGinn weighed in perfectly on the ongoing Coca-Cola, branded drinks and product placement saga, as he arrived for his pre-match press conference ahead of Scotland's game against England this friday.

As much as a fair bit has been made of the drink-based debacle, the 26-year-old did a good job of reminding us of how funny it is. A load of big corporate heads are spinning just because Ronaldo moved a couple bottles out of frame and recommended people drink water - so much so, in fact, that the fizzy drink giants have lost billions. 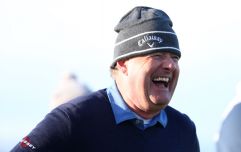 END_OF_DOCUMENT_TOKEN_TO_BE_REPLACED

It's great patter, to be fair and as you can see, the entire media room chuckles along with him. While there is an aspect of sticking it to capitalists and consumerism for some - and fair play, we'll take a win, however small, wherever we can get it - it's all just a bit daft really.

He isn't the only one to have seen the funny side either, as Russian head coach Stanislav Cherchesov decided to crack open a cold Coke and take a deep swig for all the camera to see - either that or big Vlad was on the blower earlier and told him to make sure he necked that bad boy.

CR7, Pogba, Locatelli, Cherchesov and now McGinn had their 'Coke moment' (not that kind, naughty) - who will be next?

popular
Liverpool crowned Premier League champions, but only on aggregate
This 'Welcome to Luton' prank sends Gatwick Airport arrivals into a frenzy
Ukrainian refugee who ran off with dad finally speaks out and blames man's partner for split
Shocking moment lion rips off man's finger after he sticks his hand into zoo cage
Johnny Depp trial: Kate Moss ‘testifying’ in defamation case against Amber Heard, report claims
Noel Gallagher left 'covered in blood' after headbutt from Ruben Dias’ dad
Volcano where mutant sharks live in acidic underworld crater is erupting
You may also like
Entertainment
Ricky Gervais says 'smart people' don't get angry over jokes about Hitler, AIDS or cancer
Entertainment
The Office stars say they were almost ‘poisoned’ to death while filming iconic scene
Life
Guys in search of ‘quiet pint’ end up on 4am flight to Ibiza
Life
Bizarre moment man ‘burgles home and stops to mow front garden’ before fleeing
Entertainment
Jimmy Carr has audience member thrown out for calling him a 'C**t'
Next Page