They don't call Nick Cummins 'The Honey Badger' for nothing. The former Wallabies star needed all his strength and energy to come to the rescue of a stricken sheep in his native Australia. 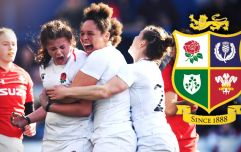 END_OF_DOCUMENT_TOKEN_TO_BE_REPLACED

Cummins, who played for Western Force and Australia before finishing his playing career out with stints in Japan and Norway, is a big outdoors enthusiast and one of rugby's real fair dinkum characters.

On his House of Rugby appearance, earlier this year, Cummins started off his interview by unpacking a delivery of hunting knives that had just come to his house. Former Ireland winger Fergus McFadden recalled, too, how he was a tough opponent on the pitch, but eager to get socialising and make new friends as soon as a match was over.

"I remembered Nick came in to talk to a few of our lads in the dressing room after the game [in 2013]," said McFadden. "We had our tail between our legs as you guys had beaten us by us by around 20 points. And he was just going on about how great a town Dublin was to go out in for a few beers!"

Working in TV now, and with an Australian Netflix show, Cummins remains a highly popular figure, and his latest post to Instagram will only add to that.

Cummins was going for a drive, today, when he spotted a sheep in trouble and stopped to help out. He jumped from his vehicle and attempted to pull the distressed ewe back through a barbed-wire fence.

It was far from easy, but 'Honey Badger' was not leaving without helping the little mite. Not so 'little', though. Our farming correspondent reckons the ewe would weigh about 70kgs.

"He's got his horns caught behind the barbed wire," says Cummins as he figures out a way to get the sheep out.

END_OF_DOCUMENT_TOKEN_TO_BE_REPLACED

"We'll try get it over the fence safely," he adds after getting the ewe out. "Bloody beautiful, eh? You're okay, buddy."

It takes an awful amount of strength to heave the sheep back over the fence. His good deed is met with a loud 'Baaaaaa!' as the animal runs off, only to be met with a call of 'You're welcome'.

Long regarded as one of rugby's top blokes, the Honey Badger is making strides in the animal kingdom too.