Harry Kane could face a ban from North London Derby

Harry Kane could potentially miss this weekend's North London Derby between Tottenham and Arsenal after an incident during Wednesday night's defeat to Chelsea at Stamford Bridge.

The England captain appeared to headbutt Chelsea's Cesar Azpilicueta during the game, though match officials missed the incident.

If referee Andre Marriner mentions that he did not see the headbutt in his post-match report, retrospective action could reportedly be brought against Kane, with a three-match ban the likely outcome.


Having lost to Burnley at Turf Moor at the weekend, Mauricio Pochettino's men fell behind to Pedro's opener shortly before the hour mark. Chelsea's lead was later doubled after a mix-up between between Hugo Lloris and Kieran Trippier, which saw the England international side-foot the ball into his own goal from outside the penalty area. 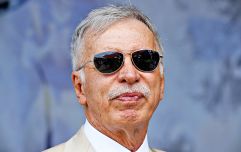 END_OF_DOCUMENT_TOKEN_TO_BE_REPLACED

The result, coupled with a convincing win for Liverpool over Watford, leaves Tottenham nine points off the Premier League summit, all but ending any hopes of them winning the title.

Victory for Arsenal at the weekend will leave Spurs just a point ahead of their local rivals. With Chelsea and Manchester United also vying for a top four space, their hopes of playing Champions League football again next season could be under serious threat.

It would be a huge blow for both Spurs and Kane, who has only recently returned to action after recovering from the ankle injury he picked up  during the defeat to Manchester United in January.


popular
The most overrated (and underrated) gym exercises of all time
Who is the most handsome footballer in the Premier League?
Bryan Cranston confirms a Malcolm in the Middle reunion happening this week
QUIZ: Name every WWF champion from the Attitude Era
The 11 unbreakable rules of making a cup of tea
Young guys absolutely lose it hearing Phil Collins' In The Air Tonight for the first time
The great big Champions League quiz