Conor McGregor has several options available to him

When you're as big a draw as Conor McGregor is, losses mean very little and the fact that he was stopped both in his most recent trip to the Octagon and in his boxing debut two years ago has seemingly done nothing to limit his options moving forward.

Despite the dominant showing from Khabib Nurmagomedov in his successful defence of his UFC lightweight title against McGregor last October, a possible rematch has already been discussed.

Floyd Mayweather stopped McGregor in the 10th round of their boxing match 14 months earlier but, again, a rematch remains an option.

Another name being talked about is Paulie Malignaggi, the former IBF junior-welterweight and WBA welterweight champion who was drafted in by McGregor for sparring in preparation for the Mayweather bout.

Sparring footage of 'The Notorious' and Malignaggi became one of the most contentious talking points in the build-up to MayMac as the Irishman released a clip which appeared to show him dropping Malignaggi but the New Yorker continues to dispute the legitimacy of the knockdown.

Malignaggi retired from boxing in 2017 but he might see McGregor as an easy payday and, apparently, early talks are underway to have the pair share the ring in a professional capacity. 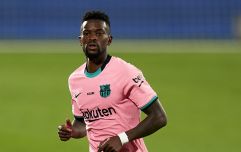 END_OF_DOCUMENT_TOKEN_TO_BE_REPLACED

Both Boxing Kingdom and MMA Insider Dizz have heard rumblings that the grudge match is being discussed although it is far from a done deal.

In the days following McGregor's defeat to Nurmagomedov in the main event of UFC 229, the Dublin fighter's head coach John Kavanagh revealed that the sparring footage of McGregor vs. Malignaggi would be released in an upcoming Netflix documentary and also said that a proper bout with the New Yorker remained an option.

"It is absolutely not out of the realms of possibilities," Kavanagh told Joe Rogan about the prospect of fighting Malignaggi.

"There are all sorts of crazy rumours going around the management team and the fight team about what might happen next.