"I think we're going to see the angry McGregor, the chip on the shoulder, the scathing Conor."

In the very early hours of Sunday morning, we will see a return. A return of one of the biggest and most polarising figures in the world of sport. Conor McGregor will take on Dustin Poirier at UFC 264 in the final installment of their trilogy. McGregor was the victor in 2014, before Poirier knocked the Irishman out earlier this year at UFC 257. 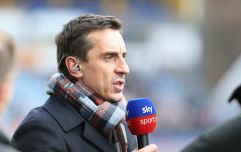 END_OF_DOCUMENT_TOKEN_TO_BE_REPLACED

So this is the decider. And it's fair to say that it feels like a bit of a last chance saloon for the Notorious. It feels too close to call and, as is always the case when McGregor steps into the ring, is likely to be one of the must-see UFC events of the year.

Ahead of the big night, we spoke to British UFC legend and former middleweight champion Michael Bisping to get his take on the fight, what we can expect at UFC 264, and whether he would ever consider a big money return to the world of fighting.

"For Poirier, it's just business as usual"

Well there was only place we could start wasn't there: who's going to walk away victorious on Sunday morning?

"Listen, if anyone was to sit here and say 'I know for a fact [who will win]' then they're a liar," Michael told us.

END_OF_DOCUMENT_TOKEN_TO_BE_REPLACED

"You never know. The reality is they're one apiece. McGregor destroyed him in the first fight. Second fight, Poirier got the job done, left him unconscious on the canvas."

"It's going to be interesting to see the approach of McGregor, is he going to pace himself a little bit, is he going to throw in a take-down himself, is he going to block the calf kicks this time? And for Poirier, it's just business as usual for him, he's just got to go out there and try and do what he did last time.

"I think we're going to see the angry McGregor"

Michael was in no doubt about what the build-up to the fight would be like though, and is expecting plenty of theatrics and mind games from McGregor.

END_OF_DOCUMENT_TOKEN_TO_BE_REPLACED

"I think the main talking point that everyone keeps asking about is the attitude of McGregor, what McGregor are we going to see," he said.

"But unfortunately for Conor, that won't work this time, because if he starts all that business then Poirier can just laugh and go 'What are you talking about? I left you unconscious on the canvas last time.'

"So for many many reasons this is a very very fascinating fight."

The future for McGregor

The fight may be too close to call, but the result will almost certainly be a critical moment in the McGregor saga. This is the man that has already announced his 'retirement' on three occasions, and Bisping reckons if he loses to Poirier at the weekend it could really be the end for Conor.

When we asked what the future could hold for McGregor if he is unsuccessful against Poirier, the UFC Hall of Fame inductee replied: "Who knows. I don't know how many fights he has left on his contract. McGregor loves to fight, but he always said he was going to get in, get rich, and get out. Well he got in, he won two belts, he got very rich, all he's got left to do now is get out!

Michael continued: "He's still only 32 years old, so he's still a young man. But I wouldn't be surprised if he retires. Anytime he fights, it's a big fight. But he wants to be the champ, and if he gets knocked out by Dustin then he's lost three of his last four... So who knows, who knows. But I wouldn't be surprised if he said, 'Guys, thanks for the memories, but I'm on to greener pastures, I'm going to do something else with my life.'

So how much of a loss would another McGregor retirement be for the world of UFC?

"The UFC don't need him, but it's always better to have him!" Bisping said.

"He's by far the biggest star the sport has ever seen. Will we see another one [like him]? Who knows!

"But Dana [White] always says himself, there's always another star around the corner. Who knows who's going to be next. But there's no doubt the UFC is a better place with McGregor around. He obviously generates a ton of money for himself and for the company.

"And look, we're all talking about this fight, it's a big fight week! Poirier is amazing, but he's not McGregor, let's be honest. Everything is coming from McGregor, the storyline, can he pull it off, can he get the win, can he get revenge?"

One week out from his #UFC264 fight, Conor McGregor was greeted by a sea of fans after leaving dinner on Saturday night 😳

There are of course other events on the night. In terms of the highlight aside from McGregor vs Poirier, Bisping couldn't look past the co-main event, Gilbert Burns vs Stephen Thompson, describing Thompson as "incredible to watch."

He said: "Gilbert Burns, we last saw him against Kamaru Usman [at UFC 258]. He didn't quite get the job done, but almost knocked him out in the first round. Great jujitsu, great guy, great wrestling.

"And then 'Wonderboy' Stephen Thompson, he's just incredible to watch, he really is. He's yet to be champion, I know that fire burns brightly inside in his heart. He's got amazing footwork, incredible striking. His last fight, I was commentating and I was just mesmerised by what I was seeing, his performance was that good. So that's a great fight."

Last month, Logan Paul and Floyd Mayweather grabbed the headlines with their exhibition fight in Miami, and McGregor himself is no stranger to a Hollywood fight for a huge payday. It's a rapidly growing phenomenon in combat sports. As one of the most recognisable names in UFC, particularly amongst British fans, would Bisping ever consider coming out of retirement for an exhibition fight against a big name?

"You never say never!" he admitted.

"But right now I'm comfortably retired, I've got a lot of things going on. I'm very happy for the doors that my fighting career opened for me, because the lad from Clitheroe wouldn't be doing what I'm doing now if it hadn't been for fighting!"

The 'lad from Clitheroe' did think that the likes of Logan Paul were good for the industry though, due to the new audiences they attract to their fights.

"It would be nice to see them get beat up at some point! But listen, there's no prerequisite to coming from a disadvantaged background to get involved with combat sports.

"Logan Paul, Jake Paul, they're YouTubers, they're entrepreneurs, but they've got a passion for the fight game and they're dedicating themselves and they're doing well. The reality is that Jake Paul is fighting better opposition at 3-0 than a professional boxer would be at 3-0.

"But hey listen, good for them. Are they annoying? Yeah they are. Are they bringing eyes to the sport? Absolutely they are. And it's fun. Yeah it drives people crazy but it's always fun to root against someone and watch someone that you want to see knocked out. So yeah they're bringing excitement, good for them."

Watch this space then perhaps. But in the here and now, only one thing is on the mind of Bisping and UFC. Notorious vs The Diamond. The third instalment in the trilogy.