If West Brom had any glimmer of hope that they might avoid relegation this season, it's probably gone now. Rooted to the bottom of the table, in their home games against teams who are not in the big six, they need to play on the front foot and try to attack. Alan Pardew's side have failed to do that and were punished by today's opponents Burnley, as Ashley Barnes fired an acrobatic shot into the top corner of Ben Foster's goal.

Let me talk you through the goal.

After some tidy build up play, slicing through the home side's midfield with relative ease, Aaron Lennon received the ball wide on the right. The nifty winger they shuffled past Kieron Gibbs and hung a cross up in the air, like he does so well.

As it becomes clear that the ball is behind, and too high for Chris Wood, Ashley Barnes drops back to attack the ball. 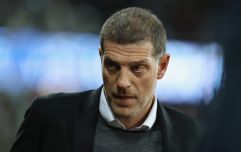 END_OF_DOCUMENT_TOKEN_TO_BE_REPLACED

And how he does attack the ball. You'd be forgiven for assuming he was going to control the ball with his chest and lay it down to Georges-Kevin N'Koudou, who is waiting in a nice pocket of space. But no, Ashley Barnes does not need his help, not with technique like this.

The volley then flies past Ben Foster, who can't even react to the shot.