Viral TikTok shows clown dancing to WAP like an expert

Who wants to party with the clown?

TikTok is just the gift that keeps on giving, and today is no different. In a now-viral clip, someone in a terrifying clown costume expertly pulls off each step of the iconic WAP dance.

WAP, which stands for wet a** p***y, in case you forgot, is a song by Cardi B and Megan Thee Stallion. Having become an overnight hit, for many, the song marked a peak lockdown experience.

A year on, and the song is still going strong, much to the displeasure of many haters. Presumably, at some form of drive-in horror experience, the TikTok creators begin playing the song with the windows open.

Then, an actor dressed in a clown costume begins bopping to the music with a rhythm that could put even Cardi B to shame. As the clown kicks upwards and a girl screams in delight, the realisation sets in that this clown is not clowning around.

The actor executes each step with sniper-like precision, so much so that onlookers are cheering throughout.

The video has since garnered over nine million views, 2.6 million likes, and just under 40k comments. 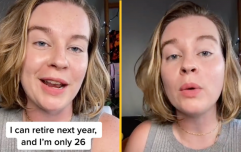 END_OF_DOCUMENT_TOKEN_TO_BE_REPLACED

"Considering I am terrified of clowns I didn't think Id be able to watch this the whole way through," begins one comment.

"This clown is a bad b***h and ain't no one gonna tell him otherwise," writes another.

Another user wrote: "Ate it up and left no crumbs."

Other people have begun reminding people of why clowns are considered the epitome of horror.

"It's all fun and games until he gets his knife," one user comments.

"God us Gen Z are messed up, we are all really cheering for this clown," another said.

popular
Moment thug kidnaps teenage ex in horrifying ordeal that left her unable to walk or talk
Martin Lewis issues urgent advice for households ahead of energy price hike
Chelsea have £3million bid for their own player rejected
Cristiano Ronaldo complained to Transfermarkt about valuation before blocking them
Coronation Street star left homeless after sharing anti-vax views
Liz Truss spent £500,000 of taxpayers' money on a private flight to Australia
Former army sergeant who became porn star explains why she made career move
You may also like
Life
I donated a kidney to my boyfriend – then he brutally dumped me
Life
This genius trick will boost your iPhone battery life
News
Lawyer explains 'tactical reason' why Queen revoked Andrew's royal status
Social Media
Woman says she sends herself anonymous drinks to show she's 'in demand'
News
Woman 'realised husband was cheating' after clocking strange detail in photo he sent
Next Page