Harry Styles was due to perform

Chilling video from yesterday's Copenhagen shooting has been circulating online as three people are confirmed dead and another two are in critical condition. 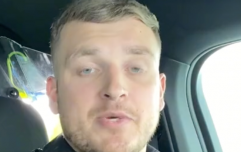 END_OF_DOCUMENT_TOKEN_TO_BE_REPLACED

A 22-year-old described as an "ethnic Dane" was arrested following a rampage that claimed the lives of two 17-year-olds and a 47-year-old Russian citizen, according to the BBC. Police chief Soeren Thomassen has since issued a statement and said that the unidentified man likely acted alone. He does not believe the attack was terror-related.

The videos have since gone viral, with many people from across the globe sharing their prayers.

22 year old Gunman seen and Gunshots heard as people ran for safety as the gunman opened fire at a shopping mall in Copenhagen, Denmark, killing multiple people and injuring others.

The suspect has been arrested. pic.twitter.com/MiDk3HiwY5

END_OF_DOCUMENT_TOKEN_TO_BE_REPLACED

Speaking to Danish media, one eye-witness recalled: "Suddenly we hear shots. I think I hear ten shots and then we run through the mall and end up in a toilet, where we huddle together in this tiny toilet, where we are around 11 people.

"It's really hot and we wait and we are really scared. It's been a terrible experience."

"You didn't know what was happening. Suddenly there was just chaos everywhere," another witness, Emilie Jeppesen, told the Jyllands-Posten newspaper. "We were sitting and going to eat and suddenly we could see people running."

A man has been arrested in connection with the attack. pic.twitter.com/dzpoqftExp

She added: "Then we first thought 'why do people run?' But then we could hear shots."

Less than a mile from the scene, Harry Styles was due to perform and was forced to cancel the gig. Crowds were already gathering for the show. Taking to Snapchat, the 28-year-old Brit wrote: "My team and I pray for everyone involved in the Copenhagen shopping mall shooting. I am shocked. Love H."

Ready to help at the terror-scene in Copenhagen, Fields. #fields #terror #copenhagen pic.twitter.com/vW497truZT

"It is incomprehensible. Heartbreaking. Pointless," said Danish Prime Minister Mette Frederikse. "Our beautiful and usually so safe capital was changed in a split second."