"This is going to make me seem like Ebenezer Scrooge"

A public health official in England thinks Christmas should be pushed back until the summer, to stop the spread of coronavirus.

In an interview with the BBC, South Tees Head of Public Health Mark Adams said delaying festive celebrations by six months would be "the most sensible thing to do".

His recommendation comes amidst rumours Boris Johnson will announce a suspension of December lockdown rules, in order to allow families to spend Christmas together as normal.

Festive celebrations could be pushed back until the summer, says a senior public health official in England. (Photo: iStock)

Adams said that postponing festive celebrations could be a necessary evil.

He said: "This is going to make me seem like Ebenezer Scrooge but I'm really worried that we focus on Christmas and undo all of the work that we've done up until now.

"[We don't want to] have a week or two week splurge over Christmas that drives our infection rates even higher and then causes massive damage in January and February." 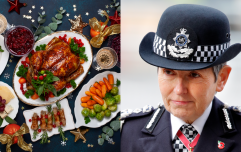 END_OF_DOCUMENT_TOKEN_TO_BE_REPLACED

When asked to specify when the postponed festivities should occur, Adams added:

"I read recently an idea about bumping Christmas back to June or July and having Christmas Day then and celebrating it then and I think that seems like an eminently sensible thing to do because we certainly can't have a Christmas like we're used to having.

"I appreciate that that's difficult for people and distressing."

According to numerous reports published earlier today, lockdown restrictions could be relaxed by the Prime Minister for the last week of December.

It has been speculated that several families could be allowed to set up a short-term 'bubble', to permit them to mix and spend Christmas together between December 22nd and 28th.

As it stands, severe restrictions are currently in place in England, with specific support bubbles the only way people from different households can mix.


popular
The JOE Friday Pub Quiz: Week 219
A definitive ranking of every swear word from worst to best
Donald Trump mocked for delivering speech at tiny little table
Can you get more than 12/15 in this childrens' TV quiz?
Funeral parlour workers pose with Diego Maradona's body in coffin
34 years on, Peter Shilton still doesn't understand the greatness of Maradona
Tyson Fury: Going bald is beautiful and should be embraced

You may also like
Quiz
QUIZ: How well can you remember the movie Elf?
Coronavirus
Professor Chris Whitty said you shouldn't hug your elderly relatives this Christmas
Life
There is nothing wrong with putting your Christmas tree up in November this year
Life
I ate every Christmas sandwich so you don't have to
Entertainment
Two brand new Mrs. Brown’s Boys Christmas specials are coming to your TV this Christmas
Next Page