This Jack Wills ad has been banned for being "sexually suggestive"

British clothing retailer Jack Wills has gotten in a spot of bother with the UK Advertising Standards Authority for a recent advert that appeared in its February catalogue.

The advert featured a whole host of lithe young models drinking and having a little party together, but a parent complained to the ASA because they believed that many shoppers who purchase Jack Wills are impressionable teenagers. 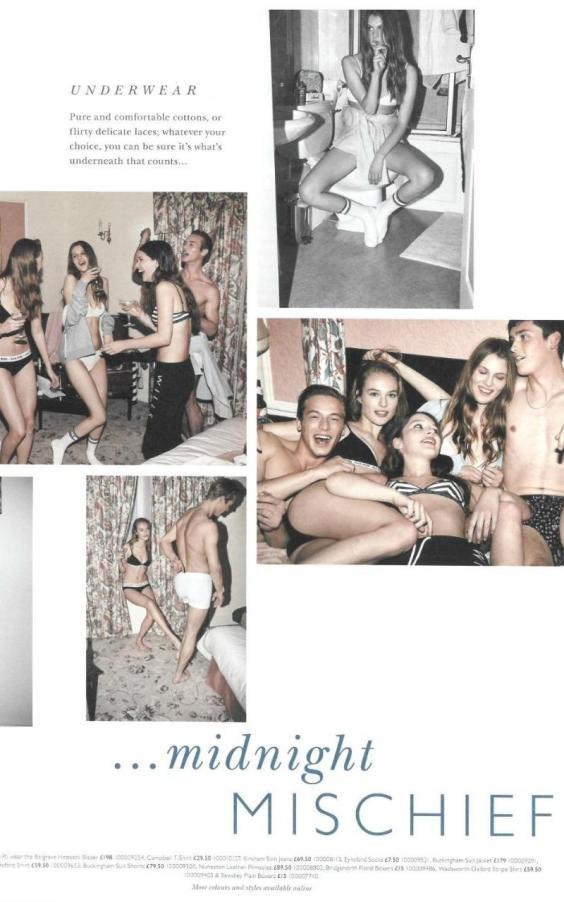 END_OF_DOCUMENT_TOKEN_TO_BE_REPLACED

Jack Wills argued that its official target market is university students from 18 - 24 years old and the adverts reflected the life stages of the college demographic.

The sequence of images along with the text was “sexually suggestive as opposed to simply being flirtatious".

The copy of the advert read: “Pure and comfortable cottons, or flirty delicate laces, whatever your choice, you can be sure it’s what’s underneath that counts”.

"Moreover, we noted that the story of the group of friends depicted them dancing and drinking while fully clothed, then dancing and drinking in their underwear, followed by an image of a woman (holding a drink) and a man next to a bed, a woman in a bra and pyjama shorts brushing her teeth while sitting facing the camera with her legs apart, and a final scene of all of the characters in their underwear in bed together."

“Because we understood that younger teenagers could have both direct and indirect access to the catalogue, and because we considered the images and text were sufficiently sexualised to be inappropriate for that audience, we concluded that the ad was irresponsible and that it breached the Code."

popular
Runner finishes last in 400m race as penis keeps falling out of shorts
Teacher's sex abuse sentence delayed after she gives birth
Massive piece of Elon Musk's spacecraft lands on farmer's property and could make him very rich
Inbetweeners star Joe Thomas has been in a relationship with his co-star for over 10 years
Woman almost died during sex when orgasm popped aorta
Tourists left 'squealing' as thousands of venomous crabs invade UK beach
NASA scientist's desperate plea before being arrested
You may also like
Fashion
Kate Moss details horrors of fashion industry and how she was asked to go topless at 15
Entertainment
Just like in 1986, sales of aviator sunglasses are up because of Top Gun
Entertainment
Brad Pitt turns up to Bullet Train premiere wearing a skirt
News
Liam Gallagher is getting rinsed for endorsing Clarks but the collaboration makes perfect sense
Sport
Adidas and Gucci team up together to create £785 loafers
Next Page