The Prime Minister’s former director of communications has apologised for the “anger and hurt” caused by a Downing Street party held in his honour during lockdown in April 2021.

James Slack, now deputy editor of The Sun newspaper, said he wanted to “apologise unreservedly” after news of a party emerged on Thursday evening.

Reports of the party, held when Britain was in Step 2 of lockdown easing, surfaced in rival newspaper The Telegraph.

END_OF_DOCUMENT_TOKEN_TO_BE_REPLACED

According to the report, around 30 people enjoyed heavy drinking and dancing late into the night, at a time when household mixing was banned indoors. The party finished hours before the Queen was pictured sitting alone at her husband’s funeral, unable to mix with her family due to Covid restrictions.

In a statement on Friday morning, James Slack said in a statement: “I wish to apologise unreservedly for the anger and hurt caused. This event should not have happened at the time that it did. I am deeply sorry, and take full responsibility.” 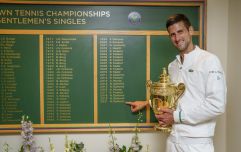 END_OF_DOCUMENT_TOKEN_TO_BE_REPLACED

The now-deputy editor of the Sun has not addressed public speculation surrounding a potential cover-up, with some questioning why Party-gate scoops from the newspaper had not materialised, despite the paper having an inside source present in the building.

Staff could be heard laughing and making references to “cheese and wine”, with Boris Johnson’s then-spokesperson Allegra Stratton joking there was “definitely no social distancing.”

The Sun's deputy editor James Slack was working in Downing Street as head of communications while the Christmas party took place.

The Sun did not run the story on its front page.

This is the second allegation of lockdown-partying in Number 10 this week.

Prime Minister Boris Johnson is facing several calls to resign, including from within his own party,  having admitted to attending a large garden party at No10 in May 2020.

Between 30 and 40 are understood to have attended the drinks gathering, after an email circulated from the Prime Minister's Principal Private Secretary invited staff to bring alcohol and “make the most of the lovely weather”.

On Wednesday, the Prime Minister claimed he thought the gathering was a work event and said he only stayed for 25 minutes. Boris Johnson is not thought to have attended James Slack's leaving do, a point Labour's Emily Thornberry has said "doesn’t matter" because the “culture at Number 10 was set by the Prime Minister".