Arsenal fans have called for the club to ban The Sun newspaper after Monday morning's front page headline chose to highlight the fact that one of the men responsible for Saturday night's terror attack in London was wearing one of the football club's shirts.

The three men are known to have driven a van into a crowd of people on London Bridge before getting out and attacking more people with knives at nearby Borough Market. Seven people were killed as a result, with 48 more left injured. 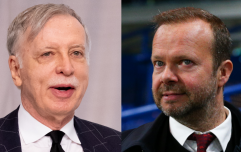 END_OF_DOCUMENT_TOKEN_TO_BE_REPLACED

Within eight minutes of the police being alerted to the attack, all three men had been killed.

Several of Monday morning's newspapers chose to publish an image of the three attackers after police had shot them dead. The Sun were one of the outlets to use the picture, but decided to use the headline to draw attention to the fact that the man lying nearest to the camera was wearing an Arsenal shirt.

Clearly, the choice of clothing of a man that has deliberately set out to kill and injure innocent people is completely irrelevant, and the choice of headline has drawn strong criticism from those that have seen it. As the tweets below show, many have called on Arsenal to ban the newspaper as a result.

I sincerely hope the club responds to this disgusting front page. Another new (?) low by The Sun. @Arsenal https://t.co/sDuAHvjXq2


I hope you ban The Sun @Arsenal https://t.co/u7RcHfCey6

popular
The JOE Friday Pub Quiz: Week 243
PM confirms restrictions will ease next week but warns of potential June disruption
Train company apologises after conductor said 'good afternoon ladies and gentlemen'
Madeleine McCann detectives ‘given dramatic new evidence against prime suspect’
Ant Middleton leaving the UK for Australia because it’s 'too pretentious'
Every Brit 'needs to drink 124 pints' to save the nation's pubs after lockdown
A New York Times quiz can determine where in the UK you come from
You may also like
Sport
Spotify owner planning Arsenal takeover bid with three members of Invincibles team
Sport
Arsene Wenger says Europe 'dreams of destroying the Premier League'
Sport
Mikel Arteta delivers message to Arsenal fans ahead of protest
Sport
The humiliation of the arrogant Super League is a moment we should all savour
Sport
Everton release powerful statement on Super League 'abomination'
Next Page