"If you hurt other people for the sake of your team, you are not a fan. You are a criminal and a loser."

That was the message delivered by Icelandic strong man Hafthor Julius Bjornsson in response to the troubling fan violence that's taken place in during Euro 2016.

END_OF_DOCUMENT_TOKEN_TO_BE_REPLACED

Many of us may know Bjornsson, from his head ripping antics as Gregor 'The Mountain' Clegane in Game of Thrones, but in real life he's a kind spirited gentle soul.

Albeit one with a 450kg raw deadlift and can claim to be on of the strongest men in Europe.

#GameofThrones The Mountain pulls a 17-ton truck with ease! #GOT pic.twitter.com/IrCTLPamVC

This week, Haftor's latest opponent was the fan violence that currently plagues Euro 2016.

How does a man twice the size of a regular human put attempt to put a stop to violence? By appealing to your good natures, of course. What a nice chap.

In a message posted on his official Facebook page, Icelander strongman made his feelings very clear.

'Violence is easy. It is ignorant and blind.

'Violence is the opposite of sport.

'if you hurt other people for the sake of your team, you are not a fan. You are a criminal and a loser. 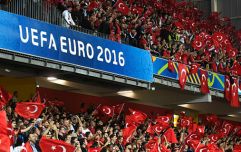 END_OF_DOCUMENT_TOKEN_TO_BE_REPLACED

Signing off with a message of "Don't be annoying" and "Love & respect", it's clear The Mountain would just like all to be kinder to each other after what has been a troubled two weeks of football.

Just try to be nice to each other. You got that Cristiano? The Mountain has spoken.