'If Harry was coming people would be reacting differently - but William... we don't want him here'

As Prince William and Kate Middleton journey to Jamaica as part of their Caribbean tour, trials and tribulations lie ahead as the region grapples with its colonial history and the Royal family's connections to the country's past. 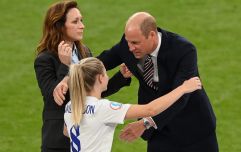 END_OF_DOCUMENT_TOKEN_TO_BE_REPLACED

Good Morning Britain's America correspondent Noel Phillips said that the Duke and Duchess of Cambridge would undoubtedly get a "warm welcome" from Jamaican Prime Minister Andrew Holness. However that isn't to say it will be warm welcomes and hugs from everyone, as Phillips predicted an "unsettled few days" ahead for the Royals.

The Duke and Duchess of Cambridge will arrive in Jamaica later today as part of their Caribbean tour.

Their Caribbean tour faces further protests with Jamaican campaigners accusing the Queen and her predecessors of perpetuating slavery.@Noel_Phillips reports. pic.twitter.com/5C1PsJCDUs

"You talk to people here on the island and they tell you that they no longer want to be associated with the British monarch," he explained, drawing comparisons to Barbados which recently removed the Queen as its head of state. "The message is simple: you are not welcome here."

In what Phillips describes as a "surreal moment," Jamaica is having "its own Brexit moment." The journalist also argues that as Will and Kate arrive, they will be plunged into a "divided" nation.

“If Harry was coming people would be reacting differently… but William.. we don’t want him here,” says dancehall singer Beenie Man, as Jamaica prepares to welcome Duke and Duchess👇🏽 https://t.co/ZpwhJc9Cyr

"The symbolism of the Queen is that of oppression," one unnamed Jamaican told reporters - but another stipulates that he "loves the Queen."

In an exclusive interview, the Countess of Wessex argued that the commonwealth is the Queen's "life's work" and that "she should be really proud of what she's achieved."

“We will not participate in your Platinum Jubilee celebration!”

Full open letter to Prince William and Kate, from Jamaica’s Advocates Network, ahead of the reparations protest at the British High Commission in Kingston tomorrow.#RoyalTourCaribbean https://t.co/svLXi37Ntf pic.twitter.com/6A8Ar3mIL3

Jamaica's "king of dancehall music," Beenie Man, also commented on the situation, stating: "If Harry was coming people would be reacting differently - but William... we don't want him here.

Ahead of their visit, 100 leaders from the Jamaican community signed a letter condemning the Monarchy, reports ABC.

NEW: Jamaica's govt is pushing forward with its strategy to seek reparations for slavery from Britain ahead of the upcoming royal visit, a minister has confirmed. pic.twitter.com/nXP7WCVAuF

"We see no reason to celebrate 70 years of the ascension of your grandmother to the British throne because her leadership, and that of her predecessors, have perpetuated the greatest human rights tragedy in the history of humankind," it read.