Families will receive the money before Christmas

Scottish First Minister Nicola Sturgeon is set to announce that all families with children who receive free school meals will get a £100 payment this year, which they can spend however they wish.

The announcement is set to be made during her speech at the SNP conference, report The Daily Record.

"The money will be paid before Christmas and families can use it for whatever will help them through the winter,"  Sturgeon will say. "That could be food, new shoes or a winter coat for the kids."

“Families will know best what they need. That’s not for government to decide."

"Initiatives like this are not just about providing practical help to those who need it most - they are an expression of our values and of the kind of country we are seeking to build."

The move comes ahead of the introduction of the Scottish Child Payment on February 15th, 2021, which will give an additional £10 per month per child under six to low income Scottish families.

"We will shortly become the only part of the UK to give low income families an extra £10 per week for every child - initially for children up to age six and then for every child up to age 16," Nicola Sturgeon will say in her speech, as reported by Edinburgh News. "This has been described as a game-changer in the fight to end child poverty."

"The first payments will be made in February. But I know that for families struggling now, February is still a long way off." 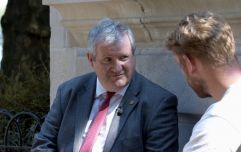 END_OF_DOCUMENT_TOKEN_TO_BE_REPLACED

During her speech, Nicola Sturgeon is also set to announce a £100 million funding package, to fight child poverty and get Scotland's most vulnerable through a difficult winter.

SNP Education minister John Swinney had previously announced at the conference that every pupil in Scotland will be eligible for free school breakfasts and lunches if they are reelected next year.