Tennis star Nick Kyrgios could face two years in prison following claims of assault made by his ex-girlfriend who has now spoken out for the first time following the alleged abuse.

The 27-year-old Australian hopeful is eyeing up a first Wimbledon final this year but was hit with claims of assault on Tuesday by his former partner Chiara Passari.

ACT (Australian Capital Territory) Policing confirmed that a "27-year-old Watson man [later confirmed to be Kyrgios] is scheduled to face the ACT Magistrates Court on the 2nd of August in relation to one charge of common assault".

The allegations against Kyrgios

END_OF_DOCUMENT_TOKEN_TO_BE_REPLACED

The incident is said to have occurred in December 2021. Kyrgios is accused of grabbing Passari during a dispute and while further details are scarce, the controversial and often divisive tennis pro could face two years in prison under the maximum penalty.

Passari went on to make a series of claims on a recent Instagram story, also replying to a comment defending her by saying: "Thank you. Finally someone smart enough to understand how the justice system works."

For those of you who genuinely missed some of Chiara Passari's IG stories for whatever reason. This is what she had to say about her ex Nick Kyrgios. Some of these are from the day of that alleged altercation (police had to be called) and others few days later pic.twitter.com/rLK8gYUOhw 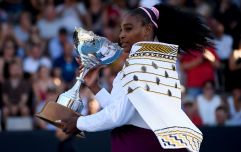 END_OF_DOCUMENT_TOKEN_TO_BE_REPLACED

As you can see in the screenshots from her story, Passari shares a number of private messages she claims were sent by Kyrgios, including ones that see him joking about hypothetical suicide and leaving her stranded in the middle of New York at 4am after he went off with "one of his exes".

She goes on to declare that "domestic violence and emotional abuse is never ok" and that "'talent' doesn't deserve fans when that's the type of person you are".

In the final slide from her story, she even name-checks German tennis player Alexander Zverev, who also has been hit with allegations of assault against his ex-partner Olga Sharypova since 2019 and was kicked out of the Mexican Open earlier this year following on-the-court outbursts.

While Passari clarifies that she isn't stating whether she believes the claims made against him or not - Zverev continues to deny that he attacked his former girlfriend twice in hotel rooms during tournaments - she does suggest that reports of his behaviour are "very similar to Nick's".

Kyrgios is facing Chilean world no. 43 Cristian Garín in the Wimbledon quarter-finals on Wednesday afternoon - this is the further stage he has ever reached in a Grand Slam.