Drop everything, because Nando's has unveiled its Christmas menu

It's been a year of division.

The British people were split 52:48 on the Brexit vote.

Just 47.3% of American voters put a mark next to Donald Trump's name on the ballot, compared to 47.6% for Hillary Clinton, as Trump won the 270 electoral votes required to be named president-elect.

Conor McGregor defeated Nate Diaz at UFC 202 on a majority decision, with only two of the three judges scoring the fight in the Irishman's favour.

In such testing times, it's good that we can find things on which everyone will agree - namely that the new Nando's Christmas menu (the *first ever* from the restaurant chain) is undoubtedly A Good Thing. 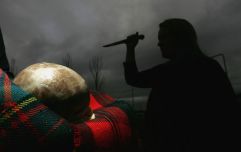 END_OF_DOCUMENT_TOKEN_TO_BE_REPLACED

That photo above? That's the PERi-Berry burger, with chicken thigh and breast, plus a mixed berry chutney. Because Christmas is about eating the whole bird, right, even if it's a different kind of poultry to the turkey you'll get at the family dinner table (or goose, but we're not made of money).

Part two of the festive menu? Orange wings. After all, nothing says Christmas like the addition of orange to something that you'd probably eat anyway, but will now eat more of because it's citrusy (we're looking at you, Terry's). The fruity, spicy glazed wings are available in portions of 3, 5 or 10, in various heat levels.

We're currently working our way through every single Christmas special sandwich we can get our hands on, but we're prepared to drop everything when the Nando's special menu lands on November 16.