American ice-cream brand Ben and Jerry's have said they would no longer sell their products within Palestinian territories currently occupied by Israel. The West Bank and East Jerusalem have been under Israeli control since 1967, after the illegal annexation of the Palestinian people.

Ben & Jerry’s will end sales of our ice cream in the Occupied Palestinian Territory. Read our full statement: https://t.co/2mGWYGN4GA pic.twitter.com/kFeu7aXOf3

END_OF_DOCUMENT_TOKEN_TO_BE_REPLACED

"We believe it is inconsistent with our values for Ben & Jerry’s ice cream to be sold in the Occupied Palestinian Territory (OPT). We also hear and recognize the concerns shared with us by our fans and trusted partners," the brand writes on their website.

"We have a longstanding partnership with our licensee, who manufactures Ben & Jerry’s ice cream in Israel and distributes it in the region. We have been working to change this, and so we have informed our licensee that we will not renew the license agreement when it expires at the end of next year.

“Ben & Jerry’s has decided to brand itself as the anti-Israeli ice cream," said current PM Naftali Bennett. However, despite Bennett claiming the ice cream company is anti-Israeli, the brand has reassured that this is not the case at all:

"Although Ben & Jerry’s will no longer be sold in the OPT, we will stay in Israel through a different arrangement. We will share an update on this as soon as we’re ready."

END_OF_DOCUMENT_TOKEN_TO_BE_REPLACED

This isn't the first time the ice cream brand has taken a stance on huge social issues. They reported on the invasion of Capitol Hill and Black Lives Matter, where other brands remained silent.

UK firm Unilever, which has owned Ben & Jerry's since 2000, says the decision was taken and announced by Ben & Jerry's and its independent board.

"The Israeli-Palestinian conflict is a very complex and sensitive situation," they said.

"As a global company, Unilever's brands are available in more than 190 countries and in all of them, our priority is to serve consumers with essential products that contribute to their health, wellbeing and enjoyment."

Over 30 states in the United States have passed anti-BDS legislation in recent years. I plan on asking each of them to enforce these laws against Ben & Jerry's. They will not treat the State of Israel like this without a response. 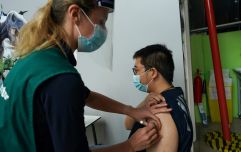 END_OF_DOCUMENT_TOKEN_TO_BE_REPLACED

Current Israeli PM Naftali Benett has responded to the move made by the ice cream brand. The boycott would have “serious consequences", says the PM, noting that the boycott was a “clearly anti-Israel step”.

He also said that Ben and Jerry's and its parent company would face “serious consequences, legal and otherwise, and that [Israel] will act aggressively against all boycott actions directed against its citizens”.