Violence shows no sign of letting up between the two territories

Israel's defence minister has said that the country will not stop its military operation in Gaza until there is "complete quiet." It's as airstrikes and rocket fire continued throughout Wednesday in the worst violence the region has seen since 2014.

END_OF_DOCUMENT_TOKEN_TO_BE_REPLACED

The death toll on both sides has continued to mount, and international leaders have called for restraint and a de-escalation of tensions amid fears that the conflict could grow into a full scale war.

There are now reports that ethnically motivated violence has escalated within Israel between Jewish and Arab groups.

As reported by the Guardian, US president Joe Biden spoke to Israeli Prime Minister Benjamin Netanyahu, saying: "My expectation and hope is that this will be closing down sooner than later."

However Biden added that Israel had the right to defend itself against incoming rockets. Meanwhile Russia has called for an urgent meeting between the "quartet" of mediating powers (the US, Russia, the UN and the EU), which has been supported by the UN secretary general, António Guterres.

The Israeli military has said that it had killed four senior Hamas commanders and a dozen more Hamas operators in its strikes. The death of a senior commander and a number of fighters was later confirmed by Hamas.

After reports that Egyptian mediators were attempting to sort out a peace deal to end the fighting between the two sides, Benny Gantz, the Israeli defence minister, said: "Israel is not preparing for a ceasefire. There is currently no end date for the operation. Only when we achieve complete quiet can we talk about calm." 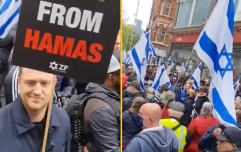 END_OF_DOCUMENT_TOKEN_TO_BE_REPLACED

"We will not listen to moral preaching against our duty to protect the citizens of Israel."

This was backed up by a spokesperson for the Israeli army, who said that he expected the fighting to intensify, and that his officers weren't "aware or particularly interested" in a possible ceasefire.

Gaza's death toll from the violence over the recent days has now risen to 65, including 16 children, according to the health ministry. More than 300 have been wounded. Israel's death toll stands at six civilians, including two children.