Christian Wakeford has been removed from the Tory MP's Whatsapp group chat, minutes after he announced plans to defect to the Labour Party.

The vocal critic of Boris Johnson had confirmed earlier this week he had submitted a letter of no confidence in the prime minister, citing Johnson's poor leadership and disgraceful conduct.

It's thought the MP for Bury South made the decision to defect to the Labour party late Tuesday evening after the chief whip threatened to remove him from his seat following a week of public criticism of the Johnson.

In his resignation letter addressed to the PM, Wakeford wrote: "From today I will be sitting as the Labour MP for Bury South because I have reached the conclusion that the best interests of my constituents are served by the programme put forward by Keir Starmer and his party
"I care passionately about the people of Bury South and I have concluded that the policies of the Conservative government that you lead are doing nothing to help the people of my constituency and indeed are only making the struggles they face on a daily basis worse."
He continued: "Under Keir Starmer, the Labour Party is back firmly in the centre of British politics, in touch with working people, and ready to provide an alternative government that this country can be proud of.
Advertisement
"My decision is about much more than your leadership and the disgraceful way you have conducted yourself in recent weeks."

Responding to the news, Leader of the Labour Party Sir Keir Starmer said: “I would like to welcome Christian Wakeford to the Labour Party. He has always put the people of Bury South first." 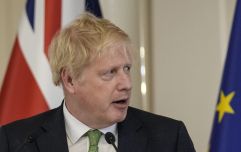 END_OF_DOCUMENT_TOKEN_TO_BE_REPLACED

Johnson said "the Conservative party won Bury South for the first time in generations with an agenda of uniting and levelling up "Mr Speaker, we will win again in Bury South".