BMW drivers voted the worst drivers on the road

BMW drivers confirmed as most hated drivers in the UK

A study carried out by vehicle finance agency MoneyBarn has revealed a lot about our attitudes towards people and the vehicles they drive. They report that BMW's are the most hated cars on the road, with 40% of the survey's participants voting for the German card brand. 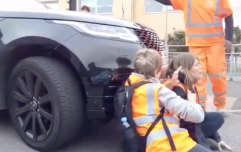 END_OF_DOCUMENT_TOKEN_TO_BE_REPLACED

The agency asked 4,000 people who 'the worst drivers on the road' are, to which the majority shared their displeasure with BMW drivers. The report reads:

"It's clear that BMW drivers have built up quite the reputation for them, hence the joke that BMW's don't come with indicators.

40% of participants said they despised BMW drivers the most

"And to hammer home how the rest of the public seems to think about them, a quick internet search for the term 'why are BMW drivers...' sees Google suggest results such as 'so hated', 'so arrogant' and 'idiots'.

In second place comes Audi, who 14.1% voted for. Next up, the vehicle everyone's mum loves to shout obscenities at, the white van. Strangely, only 7.9% of the participants voted for them. Coming in third and fourth are Range Rovers and Fords, which are clearly the most well-behaved drivers on our roads.

"It may come as a surprise that BMW drivers are disliked nearly five times more than white van drivers, as it's a common perception that white van drivers aren't the most accommodating on the roads," says Tim Schwarz, Head of Marketing and Product Development at Moneybarn.

"However, our research reveals that BMW drivers are the nation's least favourite drivers, as 39.1% of people voted them the worst drivers, followed by Audi drivers (14.1 percent).

"The white van is a common commercial vehicle which is well-known as the vehicle of choice for delivery drivers, builders, plumbers, key workers and more - yet 7.9 percent of people think they are the worst drivers on the roads.
Advertisement
"There's a common misconception that all people who drive a specific brand, such as BMW or Audi, are worse drivers, however it's all subjective and what you drive doesn't make you a better or worse driver!"