Now this we gotta hear.

Noel Gallagher's High Flying Birds new album Who Built The Moon? is due for release of Friday November 24, and during the discussion about one of the album's tracks - 'Fort Knox' - it was revealed that it was actually influenced by one of Kanye West's tracks, the drum-heavy 'Power'.

In an interview with Noisey, Gallagher talked about how he had actually intended to have the rapper appear on the track:

"David [Holmes], my producer, was saying ‘Well, let’s just pretend that you’re doing the track and Kanye is gonna come and put a rap on it.’ He never did show up. If I was on a major record label, somebody would have made it happen, and it wouldn’t have been a big deal."

"But I don’t have a record deal, I do my own thing. What am I gonna do? How am I going to get Kanye’s phone number? But if you’re watching, Kanye, and you want to put a little rap on it, be my guest."

"I do like him though. I’m a fan of him as a guy because he’s fascinating as a dude. And when he comes to England, he seems to step it up a little bit because his interviews are unbelievable. They’re nearly as good as mine. He’s great… His good tunes are great. His good tunes are fucking great." 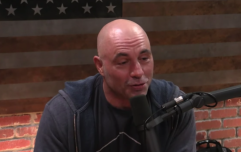 Kanye West is going to be on The Joe Rogan Experience

END_OF_DOCUMENT_TOKEN_TO_BE_REPLACED

David Holmes is perhaps best known for producing the soundtracks to Ocean's 11 movies, so that would seem to indicate that the new High Flying Birds will be very different to what we've heard before.

Noel Gallagher is set to take the new tour to the UK and Ireland and the UK in 2018 (full details here), so you never know who might suddenly decide to join him on stage for an impromptu remix.

In the meantime, take a listen to the new track and see if you can spot the 'Power'-ful influence.