Kanye West is going to be on The Joe Rogan Experience

It was always going to happen, wasn't it?

He dropped a series of mini-albums with various artists, and of varying quality.

But the likes of Ye and Kids See Ghosts was greatly overshadowed by Kanye's political outbursts. He wore his MAGA hat. He hung out with Donald Trump. He professed his love for the likes of Jordan Peterson and Candace Owens.

And most controversially, he would even claim in a TMZ interview that slavery was "a choice".

In October, he would then tweet that he was "distancing" himself from politics, after a dispute with Candace Owens over her 'Blexit' shirts.

Since then, he has been quieter. But we have a feeling that is about to change.


2019 is about to hit us in the face like a wet wish, because Kanye has just announced that he is going to be on The Joe Rogan Experience podcast. 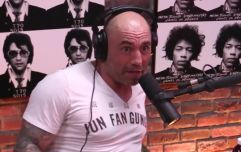 Joe Rogan invites Kanye West to appear on his podcast

END_OF_DOCUMENT_TOKEN_TO_BE_REPLACED

Oh dear god. What on Earth is Kanye going to come out with on the show?

There's been no confirmation from Rogan when the episode might come out, but we nervously await it dropping. Kanye interviews are often painful and infuriating, but they are never boring. And The Joe Rogan Experience is the sort of show that will definitely bring the best/worst out of him.


popular
Jamie Carragher blasts rule makers after late Newcastle penalty against Spurs
Mourinho responds as Spurs hit with 96th minute penalty for no-look handball
QUIZ: Can you name every top European football club that begins with 'L'?
Jose Mourinho hits back at Ole Gunnar Solskjaer after goalpost joke
QUIZ: Name the capital cities of all these 30 countries
The JOE Friday Pub Quiz: Week 210
A scene by scene analysis of the most uncomfortable moment in Come Dine With Me history