What I learned spending the day watching Sky News Raw

To celebrate turning 30, Sky News opened its virtual doors and allowed us, the nosey swines that make up the general public, to see exactly what goes on behind the scenes. 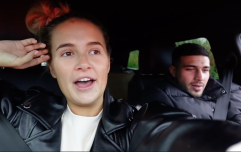 END_OF_DOCUMENT_TOKEN_TO_BE_REPLACED

From 7am - 5pm today (Tuesday 5th February), viewers were able to tune in and learn about the mammoth effort that goes into keeping a 24-hour rolling news channel on air.

I watched a good chunk of the day, what I am saying is that I didn't technically start at 7am because I was still asleep at that time (as any sane person should be), but I did my very best.

There was a lot to learn, some fascinating, some very mundane. Overall, without exaggeration, I think it may have been the greatest production on British TV in quite some time?

Please, I urge you, find a feed and watch back all 10 hours. It was glorious.

Here's what you missed on Sky News Raw.

Lewis Goodall revealed himself to be an absolute savage

END_OF_DOCUMENT_TOKEN_TO_BE_REPLACED

Enda Brady was giving us a glimpse of what reporting from outside 10 Downing Street is like, where we got to watch Lewis Goodall doing a piece to camera. Afterwards, he was chatting a bit about his job, mostly complaining about how cold it is in that particular area, then like a scene straight out of a sitcom, Jeremy Hunt exited the building. Ever the journalist, Lewis refused to allow the opportunity to pass him. He shouted after the foreign secretary:

Lewis Goodall: Any agreement on the backstop, Jeremy?

Hunt had no choice but to wave and smile, signifying that he had indeed just been had by Lewis live on a Sky News Raw.

With that, we have immediate confirmation that Lewis Goodall is an absolute savage. Would we have known that if it wasn't for this wonderful show? Probably not.

Adam Boulton got absolutely done in by a caricaturist

After being taken on a thorough wander through the newsroom, we were brought into Adam Boulton's old office, which mainly consisted of framed photographs of the man himself. Two people from the politics department chatted about some stuff, but the most important thing that happened during this segment was when the camera swung around to reveal an absolutely brutal caricature of the big boy Boulton himself.

Not only has Adam embraced this exaggerated representation of his face and indeed forehead, he's gone and hung it on the wall of his old office and left it there, presumably to reside forevermore. Credit where it's due, the eyebrows are absolutely spot on, as is the trademark disapproving smile big Boulton is teasing us with. But overall, yikes.

If nothing else came out of Sky News Raw other than the revelation that this caricature exists, that would've been enough for Great Britain on this momentous day. What a treat.

Radio newsreader Kit was roped into offering up an interesting fact about himself, which ended up being the best one of the day - Kit once worked in an Apple store and ended up being a hand model in an advert for iPads.

To be fair to Kit, he has got some very nice hands, which the cameraman treated us to a closeup of.

Sky News Raw is the greatest thing that has ever happened to British television. I am being deadly serious. What a time to be alive.

In an interesting change of pace, it was gripping to see that producer Emily had a special 30th anniversary Sky News cupcake sitting beside her at one stage, then it was no longer there when we returned. The voiceover sarcastically described this as breaking news, but truly, it was.

Look, the feed ran from 7am - 5pm. It can't all be solid gold. Even Mozart had his quiet times.

Easily the most shocking revelation from Sky News Raw was when it emerged that two heavyweights of the presenting industry, Dermot Murnaghan and Adam Boulton, actually share a desk. Surely their importance merits their own individual space, perhaps even an entire cubicle each, but no, they're forced to slum it together at an admittedly very large desk which comes with what appears to be some flavoured tea and a box of Lemsip.

Amidst the chaos that is Brexit negotiations and the absolute shit show that is British politics right now, we must not lose sight of the injustices facing our beloved TV presenters. Get Murnaghan and Boulton their own desks 2k19. We should not be forcing these grown adults to hot desk, not in this current economic climate.

The guys at the foreign desk never ate their apple, not one single bite all day

As someone who has had the same banana sitting underneath my computer monitor for nigh on a week now, it was comforting to see that Sky News workers and myself aren't cut from too dissimilar a cloth. They're busy sourcing credible news segments for broadcast, whilst I am watching telly all day under the disguise of work. But what unites us? Our inability to set aside enough time to eat a goddamn piece of fruit during the workday.

Sure, we're all doing our best out here in these modern ages, but if Sky News Raw has taught us anything, it's that we must all make time for fruit, regardless of our importance in the world. The benefits of this special broadcast were truly infinite.

I'm sternly positive that I can't be alone in long suspecting that Sky News presenters all wear tracksuit bottoms behind their desks, taking us, the general public, to be buffoons for perceiving them to be appropriately dressed even in areas where the camera cannot see. Sure, this is more of a reflection on my own psyche rather than theirs, but it's also very valid.

But today, on 5th February 2019, it has been proven that they actually wear pants, proper pants, suit pants. Every presenter was dressed impeccably, shunning the temptation to wear one of those t-shirts that looks like a shirt and tie. Even the staff behind the scenes were well dressed. Truly, Sky News Raw has educated us all. You must always wear proper pants, despite the relentless temptation to chuck on a tracksuit or continue wearing your pyjamas well into the day.

Nobody likes to wear a tie unless they absolutely have to

Throughout the day we got to see the various Sky News presenters prepping for their shows and they all had one thing in common - Nobody put on a tie until they absolutely had to. Shirt buttons were undone, chest hair was on display, hair was ruffled, it was quite a sight to behold. At one point, I'm positive I saw a presenter slinging his jacket on the seat behind him. I gasped, as did the entire nation in perfect unison.

A solid highlight of Sky News Raw was getting to witness Mark Austin unknowingly turning to face the camera and slowly prepping himself for the telly, despite already being on the telly in that very moment. Sky News presenters are human after all. They like to kick back and loosen their shirt buttons, just like you and I. Also, it was interesting to learn that they don't use clip-on ties, which proves that they are purveyors of witchcraft given the ease with which they can form a basic knot in their ties.

Everyone was on their phones the whole time so I guess we're probably all allowed to do that at work now?

Granted they were probably doing important things with their phones, such as work, but I'm using this opportunity to start a worldwide petition whereby it's just universally okay for people to be on their phones all day, even while at work.

If I want to watch Instagram stories for a quick few minutes throughout the workday, then so be it. It's not harming anyone, in fact, it's helping influencers to bump up their asking prices for #sponcon since I'm giving them a view which can be monetised. Basically, Sky News employees are allowed to be on their phones at work, so that means the rest of us are as well. Pilots, doctors, nurses, bus drivers. Everyone can just be on their phone from now on. Motion passed.

Sky News workers ignore all-staff emails to tidy their desks, just like you and I

It's likely that the staff at Sky News were all warned that there would be live recording taking place today, perhaps an email or two went around asking them to tidy their desks, make themselves look presentable, possibly even have a shower in preparation. But look at these rebels, they haven't tidied up a damn thing.

Dry shampoo, Special K, half-eaten pastries and a number of unidentified items scattered across their desks - this is living. This is what peak performance looks like, it might not be a pretty sight, but it's real. Dare I say it, it's raw. If you want a sanitised impression of a workplace, go watch Holby City. Sky News Raw is where you come for a fatal dose of reality. I applaud these workers and their bravery. Thank you for teaching me the ways of the world.