There's something about Americans commenting on British culture that fascinates and amuses us.

US writer Bill Bryson's 'Notes from a Small Island' sold one million copes with his quirky musings on everything from Bradford curries to southern tea shops and our strange and alien British customs. 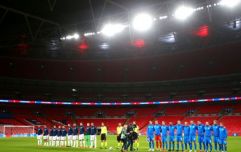 END_OF_DOCUMENT_TOKEN_TO_BE_REPLACED

But when a random American guy called Scott Waters posted some hilarious bullet-point observations about his sojourn in sunny England, the internet went bonkers.

The 66-year-old says everyone here in 'polite', there are far fewer fat people than in the US and he loves the fact that there are 'no guns'. Oh, and that every pub has a drunk pet.

He loves our TV, our HP sauce and our cider, but isn't a fan of our wine, our coffee or the fact our pubs close too early and seem to resemble living rooms.

The Florida man remarked that we consider 'Obama hero and Bush an idiot', that 'soccer is religion, and religion is sport' and he seemed quite taken-aback that 'fanny' and 'shag' were naughty words.

And he loves the accents: 'The universal greeting is “Cheers” (pronounced “cheeahz” unless you are from Cornwall, then it’s “chairz”.'