Jake Paul wants to make Musk vs Putin happen, with a blockbuster undercard to boot

We were wondering when he'd chime in

Influencer turned boxer Jake Paul has thrown his two cents in the ring after Elon Musk challenged Vladimir Putin to a fight in single combat: it would seem he not only wants to make it happen but be a part of it as well.

END_OF_DOCUMENT_TOKEN_TO_BE_REPLACED

It was only a week ago that the 25-year-old YouTuber and former Vine star jokingly posted a boxing promotion poster for a fight between him and President Putin. Now though, Paul wants to be on the undercard of this hypothetical fight.

Speaking on Monday, Paul said that if he got enough retweets he would make the "Elon Musk Vs. Putin boxing match happen", as well as proposing him versus Conor McGregor in an MMA match as one of the undercards.

Me Vs. Mcgregor In MMA 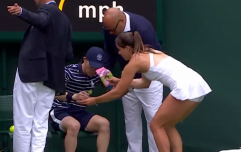 END_OF_DOCUMENT_TOKEN_TO_BE_REPLACED

Besides the fact that anyone is even remotely entertaining the fantastical notion of Musk vs Putin happening, perhaps the most ridiculous part about his suggested billing is that the other undercard would be a face-off between Kanye West and Pete Davidson.

Admittedly, they might be beefing but settling it with gloves just isn't going to happen, no matter how much Ye says he wants to "beat Pete Davidson's ass".

As for Paul himself, he has supposedly been in talks to organise a match-up against McGregor for months; whether this would take place in the octagon or a boxing ring, or if it would ever come to fruition at all is a different question.

It goes without saying amid the very real situation in Ukraine that no amount of retweets are going to catch the Russian leader's eye as he continues his invasion, nor should the likes of Musk and Paul be vying for attention during an actual war.