So what does a day in the life of Kylie Jenner entail? Probably billionaire things such as counting large piles of cash, plotting world domination and consuming as many outrageously-priced frog-shaped chocolate bars as her heart desires, right?

Currently sitting at a cool 17.7 million views, 'Kylie Jenner: A Day In The Life' has captivated audiences in a way that mainstream education practices simply could never.

So I decided to replicate her day as close as I possibly could, half out of morbid curiosity, half hoping some kind of butterfly effect would result in me becoming a billionaire too. 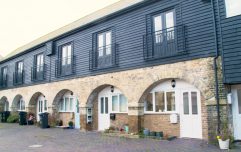 END_OF_DOCUMENT_TOKEN_TO_BE_REPLACED

Just like Kylie Jenner, I got into the shower at the surprisingly reasonable hour of 8am and cleaned myself. A billionaire's mindset is just as much bluffing as it is actual practice, I reminded myself as I waited for the water to heat up to a satisfactory temperature that would verge on scalding my body, reducing it to a steaming pile of sad but very wealthy bones.

As I rinsed the lathered shampoo from my hair, I wondered if Kylie was rich enough to do two washes of her hair each time she showers, then began to think about what kind of shampoo she would use. It's unlikely that she too buys brand name products at a fraction of their usual cost from the US-equivalent of Poundland. No, she probably uses goat semen, or that L'Oréal shampoo with glitter in it. Still, billionaires are just like you and I. They must wash the wretched stench of the night off their soft, shitty bodies each morning, or run the risk of secretly being described as 'smelly' among their peers.

Chillingly-similar to Kylie's video, I too realised that I had received some unexpected correspondence after I emerged from the shower. Kylie had two text messages from her mother, Kris Jenner, and sister, Kim Kardashian. We never found out what those texts actually said, so it's safe to assume that they were juicy and malicious as hell.


I had a notification that it was my turn to play a move on Scrabble, and a text from Domino's reminding me of their magnificent offer currently available to their best customers. Does Kylie Jenner have enough time in her day to create fake and aggressive text messages from a popular pizza franchise? Probably not, and frankly, that's her loss.

9am - Waking The Baby

Kylie Jenner has a baby. As part of her morning routine, she wakes the baby and they catch up on pressing matters such as how they both slept and whether or not Shrek 2 will ever be formally recognised as one of the greatest feats in cinematic history.

I don't have a baby, but I have a leftover baked potato from dinner last night, which is basically the same thing. So for the purpose of this piece, I woke the baked potato from its resting place in the fridge. It was cold to the touch and slightly withered, but seemed well-rested. We cuddled, exchanged pleasantries and then selected its outfit together. We both felt that nudity was a strong option, but tinfoil would make practical and fashionable sense should it need to go outside at any point.

Similar to Kylie with Stormi, I then let Spud watch some cartoons on the iPad while I finished getting myself ready.


Spud really enjoyed Peppa Pig. He found the balance of education and whimsy to be a great source of comfort while I was cursing my hair for refusing to comply with the basic laws of gravity, space and time.

Kylie decided on this particular day that she wanted to wear something pink because that would match the colour scheme in her office. She rustled through her fitting room, which as the name suggests, was an entire room, eventually settling on a pink jumpsuit. The sheer volume of handbags Kylie Jenner possesses is alarming, but given that she is a billionaire, it's roughly the same financial investment as you and I having multiple bags for life accumulated over time.

I don't have a lot of pink clothes because I am not a Barbie, nor does the colour scheme of my office (green, mostly) typically impact my outfit choices. So I went with the same black jeans and striped jumper combination that I wore the day before because probably one of Kylie Jenner's mantras is 'Be yourself' or 'You can wear the same thing two days in a row, if you're scum' or 'Stop trying to imitate my life you complete fucking freak'. Due to financial circumstances beyond my control, I altered my Primark attire in a subtle manner to appear more expensive.


Kylie eventually left her house, but was then faced with an impossible yet very common dilemma - what car would she drive to work? After a quick deliberation, she opted for the Rolls Royce, which started on the first try and took her smoothly and safely to the underground parking facility at her office.

I picked my one and only very shitty car to take me to work. It started on the second try and squeaked the entire way there because it does then when it's raining for some reason. The traffic was horrific and due to the location of my office, I parked it illegally on the roadside in an area where I got clamped before. Fun fact: The first time I took my car for its MOT, smoke started billowing out from under the bonnet and the tester called over his colleagues to laugh at whatever he was pointing to. The car didn't fail though because technically it was unfit for testing, so who's laughing now?

A few hours into the workday, Kylie's adorable daughter arrived at the office to see her mother. Kylie welcomed the break from important business meetings and gazed fondly at Stormi as she wandered around aimlessly, did a bit of dancing, went for a drive in her miniature remote-controlled car, sat quietly in on a meeting and then relaxed in her impressively-stocked bedroom that Kylie installed in the office.

I too had a visit from my child, in the sense that I brought the baked potato to work with me. Spud sat quietly on my desk as I sifted through emails and applied for Pulitzers, respecting the fact that his mother has to work to be able to afford such lavish things as tinfoil jackets and various toppings like cheese and also a different type of cheese. To mimic Stormi going for a drive in her remote-controlled car, I sat Spud on a robot hoover and took him for a spin. In that moment, I realised that Kylie Jenner and I were two of a kind. It doesn't matter how hard you work or what your bank balance looks like. Being a mother comes first, always.

At this point in the day, Kylie had to do a photo shoot to promote her famous lip kit range. After getting her already perfect hair and makeup redone, she posed with the products while a professional photographer took some photographs of her. Midway through the workday, it's always fun to be photographed for something that the entire world is going to see on advertisements. 10/10 would recommend.

As of yet, I don't have my own range of makeup kits, lip or otherwise, so I was at a loss. I also don't like getting my photograph taken, so this was tough. Rather than admit defeat, I enlisted the help of my precious Spud yet again. Once I got my hands on a colleague's lipstick, I did my very own photo shoot with Spud and immediately decided that I should launch a new range of potato makeup. The market is wide open and every great business mogul has to start somewhere. Wow, that billionaire mindset didn't take long to kick in. By 4.30pm I was feeling immensely grateful to Kylie Jenner for everything she had taught me so far.

After leaving her office through the secret exit, Kylie rushed home to get ready for her friend's surprise birthday party. She got dressed with the help of an assistant, then was chauffeur-driven to a restaurant where they appeared to have a private area reserved for the surprise party. Lots of excitable and glamorous people arrived, shrieking in unison at the excitement of seeing each other. Eventually the birthday boy arrived, Kylie gave him a bananas-expensive diamond ring, they all took a frankly ridiculous amount of photographs together, cut the cake and then partied long into the night. End of vlog.

None of my friends' birthdays landed on this particular day, so I was at a real loss for this part. I also have very little money, so reserving an area in a fancy restaurant wasn't really an option. But I had to live that sweet, sweet Kylie Jenner life, right up until the bitter end. So I turned my efforts towards Spud once again. I tried to round up some of my closest friends for a special night.

After a series of chillingly-similar replies came back to the invitations I sent around, I assured myself that friends aren't essential in the path to becoming a billionaire, in fact, they're in hinderance. Plus, they'd likely come crawling back when I finally hit the jackpot with my baked potato makeup line anyway. Not disheartened, I rushed home before Spud could get there (we drove together but I locked him in for a while when we arrived), set up a small party and surprised him to celebrate his second day of life.

Spud was shocked. He couldn't believe I had gone to so much effort, which kind of upset me because of course I would throw a surprise birthday for my son. Regardless, we partied, we drank sparkling rosé, exchanged gifts and I avoided the temptation to reheat Spud when I got hungry. Kylie Jenner probably doesn't eat carbs, so neither do I.

In living a day in the life of Kylie Jenner, I learned three main things. Firstly, money can't buy happiness, but it can make life a bit easier. Rather than striving to become a billionaire, you should focus on doing something that gives you fulfilment in life. Potato makeup kits luckily tick both of those boxes. Secondly, regardless of your billion-dollar business endeavours, it's important to strike the right balance between friends and family. Nobody wants to be a rich loner. Thirdly, a baked potato is the perfect companion to any lifestyle, billionaire or not. When life gives you lemons, throw them in the bin and stick a potato in the microwave for five minutes instead. The end.

You may also like
Life
A thorough dissection of Boris Johnson's tea making technique
Life
Six subtle ways to lay the groundwork for skipping your work Christmas party
Life
Every letter of the alphabet ranked from least to most banter
Life
Personality Test: What percent boujee are you?
Life
These are the only 6 ways you can ever leave the pub
Next Page