Following Donald Trump's defeat at the hands of Joe Biden and Kamala Harris, a group of rioters raided Capitol Hill to protest the result. Alt-right groups were heavily involved, and it was reported that several pipe bombs were found on site. Seven months later, a fourth police officer who responded to the attack has died by suicide.

END_OF_DOCUMENT_TOKEN_TO_BE_REPLACED

"We came close to half of the House nearly dying on Wednesday... and if another head of state came in and ordered an attack on the United States Congress, would we say that that should not be prosecuted?" Senator Alexandria Ocasio-Cortez said. "It is an act of insurrection, it's an act of hostility, and we must have accountability because without it, it will happen again."

Officer Kyle DeFreytag, 26, had joined the force in 2016. He had been working the late shift when he was called to Capitol Hill. DeFreytag’s death is the fourth suicide related to the attacks.

In a statement to fellow officers, the DC police chief wrote:

I am writing to share tragic news that Officer Kyle DeFreytag of the 5th District was found deceased last evening. This is incredibly hard news for us all, and for those that knew him best. 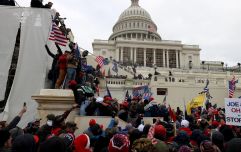 END_OF_DOCUMENT_TOKEN_TO_BE_REPLACED

DeFreytag's passing was announced on the same day as the death of Gunther Hashida, 43, was announced. Veteran Jeffrey Smith, and Officer Howard Liebengood have also taken their own lives.

His death was announced on the same day as it was confirmed that fellow officer Gunther Hashida, 43, had also died by suicide, with 12-year force veteran Jeffrey Smith and Capitol Police officer Howard Liebengood also having died in the months following the attacks.

Just horrible. Now a 4th officer who responded to the domestic terror attack on the Capitol has died by suicide — Officer Kyle DeFreytag.

These officers saw their colleagues beaten as an angry mob tried to kill the VP & Speaker of the House.

Republicans call it a tourist visit.

Former President Donald Trump was impeached for a second time following the attack on the Capitol, charged with inciting the insurrection. However, The Senate acquitted him back in February.

popular
Robin Williams' wife shares reason why he killed himself
‘Time traveller from 2090’ warns humans of worst event in history in coming days
US actress Anne Heche is not expected to survive, family say
Map shows UK covered in yellow as Met Office warns of 'scary' heatwave
Groom shocks wedding by playing video of his bride cheating with her brother-in-law
Woman arrested after husband caught her on video allegedly using drain cleaner to poison him
Fans shocked by Tommy Lee's extremely X-rated post on Instagram
You may also like
News
Donald Trump says FBI agents 'raided' his Mar-a-Lago Florida home
News
Joe Rogan reveals the one reason he will never have Donald Trump on his podcast
News
Ex-Trump aide claims he tried to grab the wheel when his driver wouldn't take him to Capitol riots
News
Ghislaine Maxwell claims inmate planned to ‘strangle her in her sleep' for money
News
Elon Musk says Biden only won the 2020 US election because people 'wanted less drama'
Next Page