The following article is written by Neil Beasley (pictured above), a player with, and a former chairman of, Birmingham Blaze, National Gay Football Supporters Network League champions and Midlands Unity League champions. Neil was born in 1985 and grew up in the market town of Bicester in Oxfordshire, he is a lifelong player and lifelong fan of football.

Football is gay. Think about it for a minute. The bonds between the players, between supporters, between opponents.

END_OF_DOCUMENT_TOKEN_TO_BE_REPLACED

Think about the reaction when a player scores a goal. There’s the elation in the stands and the elation on the pitch. You get grown men running up to each other, sharing in the moment. They’re hugging each other and maybe sometimes even kissing. Human contact. Men touching men.

And yet the football pitch is no place for a gay man. We’re looked down on, belittled, victimised. We’re not meant to like football. We’re supposed to be fans of musical theatre, content with sitting at home and watching Sex and the City whilst gossiping in our closed circle. That’s what I was taught when I was growing up, anyway. Society conditioned me to believe that being gay wasn’t compatible with being a man. Whether consciously or subconsciously, it was always there.

Being gay is natural. You can’t help it. It’s not like there was suddenly a moment where I thought ‘nah, I’m not into girls anymore. I’m all about boys now’. For me it was a slow process. As I grew with age I began to realise my feelings weren’t ‘normal’. I put normal in quotation because at the end of the day what really is normal? But try as I might I couldn’t accept these feelings. How could I like boys when I was besotted with football?

The two pursuits weren’t compatible. Not as far as I was led to believe, anyway. And so I tried to cover it. I shut up, stayed quiet and tried to shut out my natural feelings. I got myself a girlfriend in an attempt to become ‘normal’. I know, I know. Looking back I’m not proud of my actions but at the time I felt it was something I had to do.

It wasn’t just my actions off the pitch, either. I was terrified of being outed and so I adapted my playing style. I became this real hyper-masculine defender, never afraid to scream at my teammates, my opponents or the referee. With Stuart Pearce my idol, I became this hard-but-fair defender who dealt in controlled aggression and signature slide tackles. Nobody would have ever suspected me. I was safe.

You can’t live your whole life as a lie. As much as I’d have liked to, it was something I had to do. I came out to my team. I stood there, my heart backflipping, my stomach churning, and uttered those words... "I’m gay"... I’ve never had to do anything more terrifying in my life. I never will.

There have been issues, but by and large my fears haven’t been compounded. That’s not to say that they ever go away. Here I am now, more than 10 years on, and I’m still terrified of any hostility. To many, it may seem unreasonable. With every year society is becoming more accepting. As I was first coming to terms with my sexuality all those years ago I had Justin Fashanu to look up to as an example. No wonder I felt I had to hide what was natural. 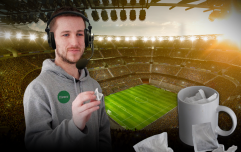 END_OF_DOCUMENT_TOKEN_TO_BE_REPLACED

Nowadays it’s different. People are a lot more educated and understanding. But we’re still a long way from equality. A 2012 study by Stonewall found that over half of young gay people had considered ending it all by taking their own life. There’s still a stigma attached to being gay and that’s reflected in football. Don’t tackle hard enough and you’re a "poof". Wear gloves on the pitch and you’re a "faggot". That’s not all. The Gay Football Supporters Network spent a whole season following Brighton & Hove Albion in their league games. Their study showed that Brighton’s fans experienced some form of homophobia in 57% of all matches, with the most popular chant being "You’re just a town full of faggots". To many who are singing these chants, they’re just words, but those words can have such impact on people's lives.

We’re getting closer to equality. Things are changing. We have initiatives like Stonewall’s Rainbow Laces and Football vs. Homophobia which are helping to raise awareness and understanding even further. But it’s not enough. We need to overcome homophobia everywhere. In the stands, at the training ground, on the pitch. The power is in our hands.

But what can you do to change football for the better?

1) Think Before You Sing

END_OF_DOCUMENT_TOKEN_TO_BE_REPLACED

There’s something tribal about a football crowd. You’re either with it or against it. And, to be honest, when you’re with it it’s great. You join together, one mass group of people, singing your heart out for the boys. But sometimes it only takes a couple of people to change the tone. They’re only words that you sing, but those words can have a deep effect on those around you. Brighton fans, as previously mentioned, are often subjected to chants of "You’re just a town full of faggots". Some of the people singing this will just be part of the crowd and will just want to fit in. But by fitting in you’re excluding others in a much more impactful way.

It didn’t help me. I thought that by staying quiet and just waiting I might grow out of being gay. Maybe it was just a phase… It didn’t work. I didn’t suddenly become ‘normal’ – ‘straight’ – and the only thing that I grew out of was my shoes. Staying quiet in later life didn’t help either. When you see someone crying homophobic abuse, don’t stay quiet. Challenge them. Ask them why they’re spouting such nonsense. Put an arm around them, ask them what’s gone so wrong in their life that they feel they need to abuse others. It’s only by challenging others that we can eradicate homophobia.

3) No Prejudice, No Privilege

Each of us is special in our own unique way, but preferring men to women doesn’t make me any better than anyone else. Why should I get opportunities that others don’t just because of my sexuality? I don’t want to be subjected to homophobia but this kind of reverse homophobia isn’t much better. My sexuality shouldn’t be put on a pedestal. People think that they can use it, can privilege homosexuals and think that by doing so they tick boxes and get their diversity and equality awards and everything is peachy. No. I don’t want to be treated differently. We don’t want to be treated differently. All that we want is to be treated the same as everyone else.

Football’s Coming Out: Life as a Gay Fan and Player by Neil Beasley is published by Floodlit Dreams and is available to order at Waterstones or Amazon for £9.99.