Big game hunter killed after shot elephant falls on him

While hunting in Zimbabwe.

A South African professional hunter has died after Zimbabwe after an elephant shot by a member of his group fell on top of him. 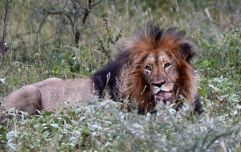 END_OF_DOCUMENT_TOKEN_TO_BE_REPLACED

51-year-old Theunis Botha was walking with a group of hunters on Friday when they were stormed by three female elephants, reports News24. Botha fired on them, but then a fourth elephant approached from the side and was shot and killed by another member of the group. The animal then collapsed and fell on top of Botha, killing him.

He is survived by his wife and five children.