Apple have been left red faced after the rolling out of the new iOS 10 update this week when it was discovered a new feature in the update, was providing some very NSFW items.

A new feature in iMessage allows you to search and insert gifs into your messages... you know, because gifs are actually way funnier than you will ever be.

Initially, if you searched "butt" on the app, it would bring up a gif of My Little Pony in a very, very compromising position. We're not going to show you the gif though, because it's quite disturbing, but Apple have now blocked it from the app.

But that's not the only search term which managed to sneak its way through the Apple net. If you searched "huge", a gif appeared of a lady giving felatio to a man with an abnormally large beef bayonet, as captured by Deadspin. 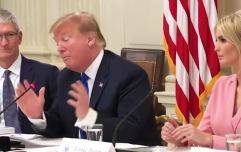 END_OF_DOCUMENT_TOKEN_TO_BE_REPLACED

Apple has since removed this term from the app, and the above gif has now disappeared as a result.

We're not sure how many other instances there has been of pornography appearing on the app, but there may still be some kinks to work out so don't be surprised if this isn't the last glitch you see on the update.

popular
Hedge fund requires bailout after Reddit users cause 800% increase in GameStop shares
QUIZ: Guess the football stadium from the photo
A definitive ranking of every swear word from worst to best
Premier League admit offside mistake for Man City goal
Zlatan Ibrahimovic aims dig at Romelu Lukaku as he posts anti-racism tweet
Zlatan Ibrahimovic tells teammates no racist words were used in Lukaku exchange
Influencer defends her trip to Dubai, claims it was for 'essential work'
You may also like
News
Apple forced to pay £85 million after admitting they slowed down old iPhones
Entertainment
Apple is finally killing off iTunes for good
News
Apple announces new cross-platform gaming subscription
Entertainment
Apple announces new video streaming service to rival Netflix
Tech
Your iPhone has a secret list of every single place you've ever been
Next Page