The Football League One relegation battle takes no prisoners

How bad do you want it? Would you be willing to abandon your principles, get down and dirty with morally dubious decision making or actively cheat to save the club you know and love? 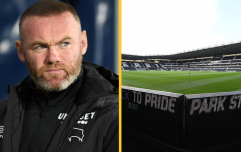 END_OF_DOCUMENT_TOKEN_TO_BE_REPLACED

Scunthorpe United's Josh Morris knows the answer. He played in Scunny's relegation war with Plymouth Argyle, a deciding match that both teams needed to win to have any chance of survival in Football League One.

Morris was prepared to prevent Argyle from putting the ball out of play so an injury could be treated and then chip the keeper to equalise.

I'm not kidding. The Argyle keeper tried to roll the ball out for a throw in order to receive treatment but didn't chuck it hard enough to stop Morris from intercepting. The wide man proceeded to dink the ball over the goalie and prompted Plymouth's home crowd and players to explode.

Argyle's official Twitter called it "the most unsporting goal in Home Park history."

The most unsporting goal in Home Park history.#pafc

Scunthorpe did not opt to pull a Leeds/Villa and allow an open goal.

Still, Argyle managed to claw one back and win the game 3-2 but results elsewhere rendered it meaningless.

Scunthorpe and Plymouth were both relegated.

Matt Macey looks to be injured and rolls the ball out of play, but Josh Morris keeps it in play and tucks home!