They are doing God's work!

A Facebook group devoted to counting and cataloguing the number of chips per portion at Wetherspoons might just be the best thing you have seen all day.

There is nothing worse than your meal finally arriving and alongside your main is a portion of chips that equates to little more than the size of your palm.

Well, worry no more because there's a new hope here to tackle this serious societal issue.

A decent portion by all accounts/Via Wetherspoons Paltry Chip Count 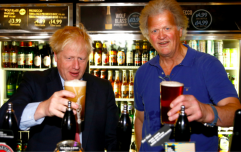 END_OF_DOCUMENT_TOKEN_TO_BE_REPLACED

With 16,000 members across the UK, the group rules are simple. The first is that no prejudice will be tolerated and those who violate this golden rule will be banned. The second is no off-topic posts, reiterated again with the reminder "just chips" printed beneath the rule.

The group's premise is simple: post an image of your meal alongside the number of chips you were served.

Lewis posted an image of a huge bowl of chips alongside the caption: "A whopping 62 at the Childwall Fiveways Hotel, Liverpool."

Though most of the posts follow the same structure, the connoisseurs out there deviate from normality. For instance, Jack asked how people like their chips, the options being: "Blue, rare, medium rare, medium to well done, well done."

In case you were wondering, Jack likes his well done.

Alongside his image, Matthew posted: "A 16 and 18 chipper. Terrible show wife's in tears kids gone home sleeping on the sofa. St ives cornwall."

Another post reads: "Long time admirer, first time poster. Saw mention of 22 chips on offer at The Monkey Walk, Coalville, so had to come down to perform an independent audit. To my surprise I have been given 24 chips."

If that wasn't enough to tickle your funny bone, then a user's reply might.

"This is what i love to see, verification/audits of previous posts. Glad to see an improvement on chips numbers, let's keep moving forward people, keep up the great work," he writes.