Each and every part of a Full English Breakfast, ranked from worst to best

The Full English Breakfast, it's like a gallon of unleaded for British people – without it, we cough, wither, and eventually die helplessly by the side of the road

While most people agree that some parts of a fry up are totally sacrosanct – imagine a Full English without bacon or some form of egg – there are a few different ways to make one.

This is why we've included a few different ways of cooking eggs here (although only one of them is right), as well as a couple of bread and potato options. So here's the countdown... 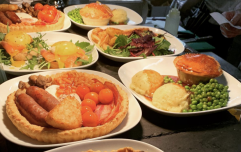 Eating a full English breakfast inside of a pie

END_OF_DOCUMENT_TOKEN_TO_BE_REPLACED

Fried bread is fucking disgusting. It is a 0/10 food. Bread should not drip grease when you squeeze it, it should be soft and dry enough that it is able to mop up the dregs of your plate when you're done. You can feel yourself getting closer to death every time you take a bite of a piece of fried bread. Garbage.

The worst type of eggs to have with your Full English. What good is the yolk if you're mushing it up with the rest of the egg so it's nowhere to be seen (or dunked in)?

The bit you never ate when you were a kid. Also prone to splurting molten hot jets of tomato juice all over your Sunday best.

It's just toast. You can't make a list of 13 foods and put toast higher than 10th. You just can't. Toast is useful because you can dip it in your beans or egg, but it's an accessory to the Full English, not part of the main event.

The other bit you never ate as a kid, but actually pretty good now your balls have dropped and you care for meals more diverse than "two bags of Haribo, three packets of Monster Munch and a Twix".

Poached eggs are excellent eggs, maybe even the best eggs, but they're not the best eggs for a Full English. Whack them on an English muffin with a bit of smoked salmon and some hollandaise sauce and you're got yourself a great little posh boy's breakfast, but if you're going for a proper Full English then there's only one way to cook your eggs, and they come much higher up the list.

What is the meaning of life? How did the universe begin? Do baked beans really belong in a Full English Breakfast? These are the biggest questions that have been troubling our most magnificent minds since the dawn of humanity. So do they? Do beans belong on a Full English? I dunno, it's your fucking breakfast, do what you want with it.

Bacon is one of the world's greatest foods, basically anything can be improved by wrapping it in bacon – if Donald Trump wrapped himself in bacon he'd probably be walking into the White House this week (but also that would be a whole lot of pig right there, am I right?) Despite bacon being a top ten food though, when it comes to the Full English it doesn't even make the top five...

"Eugh, black pudding is so gross and belongs in the bin," – the opinion of a total idiot baby. If you can't handle black pudding in your Full English, then you don't deserve your Full English at all. Sure, the idea of pig blood all mashed up with fat and breadcrumbs held together in an intestine SOUNDS pretty disgusting, but you know what they say, never judge a sack of minced up pig bits by its cover.

It's not every day you get to have bubble and squeak with your Full English, it's very rarely part of the package at your local caff and is seen as a bit of a left-field choice, like mixing chilli and chocolate or playing Victor Moses as a wing back. The thing about both of these though is that they somehow work, and whacking a couple of bubble and squeak (bubble and squeaks? Bubbles and squeak?) on top of your regular fry up is a choice you definitely won't regret.

Easily the best eggs to have with your Full English, party because they just go best with the rest of the meal, and partly, we've got to be honest, because if you're going to be frying the rest of the stuff on the plate, then it's just easier to slap these in the pan as well. Ain't nobody got time to go poaching eggs when you've got about five other things on the go at the same time.

Here they are, the main event. You can't have a Full English without the sausages – it'd be like having roast beef without the beef or a bowl of cereal that's just milk. Whether you're a fan of more expensive fancy butchers' sausages or are a sucker for a pack of Richmonds, sausages go great with every part of the Full English. Sausage and egg? Great combination. Sausage and beans? Great combination. Also they're pretty good for mopping up all the bean juice and egg yolk at the end if you're not in the mood for toast.

Obviously hash browns are number one, because hash browns are a treat you basically only ever get to enjoy with a Full English, and that makes them feel more special. If there's a better way to cook potatoes than this then we definitely haven't found it. Biting into a crisp and fluffy hash brown feels like getting into a freshly made bed after 24-hours without sleep. They are the big spoons of breakfast food, holding you in their arms and keeping you warm and happy – a clear winner.

popular
Patrick Vieira appears to kick fan after Everton defeat
Johnny Depp's lawyer Camille Vasquez responds to romance rumours
'I did three grams of coke during a game': Inside football's problem with Class A drugs
Amber Heard's acting coach explains exactly why she believes her tears are real
Man United cancel end of season awards after player requests
Johnny Depp's attorney Camille Vasquez revealed to be dating Brit
'Wow, hats off to her! Sick remark from Bobbi Anne McLeod's killer after she survived 12 hammer blows
You may also like
Food
Black Pudding: The most underrated part of a Full English?
Food
Eating challenge: we tackled London's biggest breakfast
Food
A burger van in Wales is selling this heart attack in a loaf
Food
You can now get a full English breakfast served in a giant Yorkshire pudding
Food
Lidl are selling the ultimate full English breakfast pan for just £12.99
Next Page