Meet the monster men gunning for the half-ton deadlift

Right now there’s an arms race between the most powerful men in the world.

But this is not nuclear proliferation with the old enemies of America and Russia.

A small cabal of elite strongmen are pushing the limits of human strength in a battle to do what many thought impossible – the half-ton raw deadlift.

That’s 500kg – or 1100lbs in old money. Mere mortals like us here at JOE can’t even begin to comprehend that amount of weight on a barbell.

Little over a year ago the big milestone for strongmen was to pull 400kg – but that target has been shattered.

The record now stands at 462kg – just 38kg off the magic 500kg. Many people now believe the impossible could become a reality, so JOE wanted to take a look at the contenders vying for the ultimate strength crown. 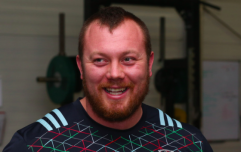 END_OF_DOCUMENT_TOKEN_TO_BE_REPLACED

Profile: We all knew Hall was strong – but in 12 months he turned the strongman world on its head. He surprised everyone by coming from relatively nowhere to almost equalling the world record deadlift at Europe’s Strongest Man in Leeds last year.

Here he is casually holding 435kg up while being interviewed by Caroline Pearce. Smooth.

Hall then went one better and smashed the world record, lifting 462kg in the presence of Arnold Schwarzenegger.

His secret is apparently maxing out his bar in the gym - hitting speed reps at 420kg.

Rumours are that the Mohawk-sporting Goliath has hit 480kg in training and he recently said: “There’s more in the bank. I think I will be the first man to do the 500kg deadlift.”

The frightening thing is he is only 26.

Profile: Icelandic giant Benedikt Magnusson is one of the world’s greatest powerlifters...ever.

He has more strength records under his belt that we’ve had hot dinners.

Until this month he held the world deadlift record for pulling 461kg. He went head-to-head with Brit Eddie Hall and came out on top. Until our Eddie got the last laugh at the Arnold Classic.

We dare say these two will be going up against each other again in a bar fight ­– and strength-wise you couldn’t put a fag paper between them.

Here’s ‘Benni’ hitting that huge lift at Leeds Carnegie Stadium. Looks like he enjoyed it

If anyone can hit 500kg and carry on the proud strength traditions of his native Iceland, it’s Magnusson.

We know he has pulled 500kg on the Hummer tyre deadlift…

Don’t bet against him being the man to rewrite the history books.

Profile: In strongman terms, Žydrūnas Savickas is the daddy. We’re pretty sure that if you Google translate his Lithuanian name to English it would say ‘God of Strength’.

He is still the only modern athlete to have won every major strongman competition – including four World’s Strongest Man titles. Just the 31 major accolades, no biggie.

If there’s a record to be broken, he has probably done it. We don’t mean to sound like a broken record, but here he is, er, breaking records….

The ‘Z-Dawg’ is known for his freakish shoulder strength with an unassailable 227kg log press record. But the man from the old Eastern Bloc is not too shabby on the old deadlift.

Yet again he holds the record for the Hummer tyre deadlift at 525kg so we know he can lift.

Officially he has hit a 440kg deadlift with wraps – but whispers are that he pulled a monster 470kg in training. He might be pushing 40, but he could be pulling 500kg with that muscle maturity.

Profile: Brian Shaw is a monster – even among his fellow strongmen. The American stands at 6ft 8ins tall and weighs a colossal 200kg. That seems to be the reason why they call him ‘Big Bear’. But if I were a bear, I’d probably steer well clear of this guy.

Shaw’s record speaks for itself – two World’s Strongest Man titles and a string of other old-medal finishes in top events.

But despite having to pull the bar a fair bit higher than his competitors, Shaw is a mean deadlifter. He pulled a 442.5kg lift in the finals of the World’s Strongest Man in 2013 and recently won the Hummer tyre deadlift at the Arnold Classic with 509kg.

He pulled out of the deadlift-off at Europe’s Strongest Man 2014 with an injury. But we know he has a HUGE lift in him.

All eyes will no doubt be on the World’s Strongest Man 2015 in April to see if the 500kg milestone will finally fall.