We must stress, this is an unconfirmed report

Space Jam 2 - aka Space Jam: A New Legacy - coming soon, set to be released next summer. The sequel sees LeBron James replace Michael Jordan, teaming up with all your favourite Looney Tunes, like Bugs Bunny, Daffy Duck, Porky Piig and Foghorn Leghorn. Oh, and also The Joker, and Pennywise from the IT movies.

Ok, so the synopsis for the movie has reportedly leaked, and it sounds wild.

The synopsis for SPACE JAM: A NEW LEGACY is certifiably bananas and I for one cannot wait to see it pic.twitter.com/BLmc4x5uHb 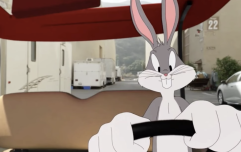 END_OF_DOCUMENT_TOKEN_TO_BE_REPLACED

So apparently, the film revolves around LeBron's son getting lost in a world populated by all the characters that Warner Bros own, and then LeBron teams up with the Looney Tunes to save them.

And then, because this is a Space Jam film, they have to win a game of basketball to get him back, against a team of evil versions of NBA and WNBA stars.

Reports have also suggested amongst the bad guys from the Warner Bros world appearing are The Joker and Pennywise from IT.

'Space Jam 2' will reportedly have LeBron James and his son get trapped in a Warner Bros multiverse that includes Pennywise and the Joker ??

To return home, LeBron and Bugs Bunny must reassemble the Looney Tunes and play against digital super-versions of NBA & WNBA stars pic.twitter.com/KZEK3vVsZC END_OF_DOCUMENT_TOKEN_TO_BE_REPLACED

Reports and supposedly leaked set photos also suggest that characters from The Mask and  The Wizard of Oz will also feature.

We'll have to wait until next summer - or at least the first trailer - to find out how true this all is. But it is worth noting that The Lego Batman Movie pulled off a similar trick, featuring the likes of Gremlins, the Daleks from Dr Who, King Kong and Voldemort alongside Batman's normal rogue's gallery.