WATCH: Family Guy may have hinted at Kevin Spacey allegations back in 2005

Seth MacFarlane seems to be doing his best to out inappropriate sexual behaviour in Hollywood.

Following the multiple allegations of sexual assault and rape against Harvey Weinstein in recent weeks, many recalled MacFarlane's barbed dig at the disgraced film producer at an Oscars event back in 2013. 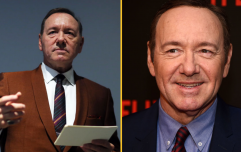 END_OF_DOCUMENT_TOKEN_TO_BE_REPLACED

Indeed, the creator of Family Guy went on to explain the reference to Weinstein in a tweet:

Now, following the allegations that Kevin Spacey made sexual advances towards a 14-year-old Anthony Rapp in the 80s - and the actor's subsequent apology statement - footage has emerged of a supposed reference to Spacey's alleged behaviour in a 2005 episode of MacFarlane's Family Guy.

Spacey has responded to the accusations by claiming he was drunk and doesn't remember, and that he wants to 'examine his own behaviour'.

This, there's not much you can do if you aren't a witness to a crime or a victim. It's not like Seth MacFarlane can just hold a press conference everytime he hears a rumor about someone doing something bad in Hollywood, especially given libel/slander laws.

This is the second time @SethMacFarlane has predicted/leaked a high-profile abuser. Do we need to back mine @FamilyGuyonFOX for clues?