Viewers are absolutely convinced The Chase was rigged to avoid paying out a £60,000 jackpot

What? A game show on TV? No way

Viewers of The Chase are absolutely convinced that Wednesday night's show was "rigged" and "fixed" so that the Governess would not only win, but deprive contestants of a record £60,000 jackpot.

Who'd have thought a game show that pits dinner ladies versus professional quiz champions did so on an uneven playing field.

The controversy centres around a timer, which appeared to slow down, during the final chase. 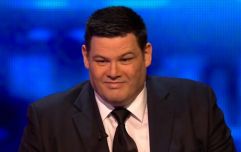 END_OF_DOCUMENT_TOKEN_TO_BE_REPLACED

With just seven seconds remaining the Governess, real name Anne Hegarty, got a question wrong and contestants Peter and Warjinder managed to take advantage and push her back another space.

After getting the next question right Hegarty was asked which continent the blue spider was native to.

But the clock seemed to linger on 0.01 for a significantly longer amount of time than it should have.

Please respond to your discraceful cheat @ITVChase
A lot of people are really unhappy. Those contestents deserve (at the least) an appology. Even though you owe them 30k each#Thechase #Itv

Absolutely scandalous #thechase The only person who believes that last ‘second’ actually lasted only a second was the person who had to write out the cheque! Players were robbed! Stinks of a fix!

Oh my goodness! Nail-bitingly close , with only a second remaining, @ITVthegoverness catches our team and takes away £60k.

What a #FinalChase, what a show, I think we all need a cool down out in the snow after that! #TheChase

Some even complained to Ofcom.

Heaven has no rage like love to hatred turned, nor hell a fury like a Chase viewer scorned.

And in other Chase related news, check out this utterly unbelievable attempt at a cash-builder.