Filming for the sequel to Danny Boyle's seminal movie Trainspotting is underway, and the crew is looking for extras to appear in a nightclub scene.

That's right - you could be in Trainspotting 2, or T2 to give it its official title.

END_OF_DOCUMENT_TOKEN_TO_BE_REPLACED

Infamous Edinburgh nightclub Cav put out the call on their official Facebook page, instructing people between the ages of 18 & 30 years old to attend the shoot on June 14 in their best 80s gear.

They revealed that Danny Boyle and the original cast of Ewan McGregor (Rent Boy), Robert Carlyle (Begbie), Jonny Lee Miller (Sickboy) and Ewen Bremner (Spud) will all be in attendance at the limited capacity event. 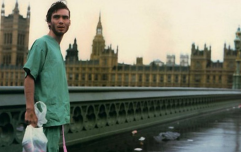 END_OF_DOCUMENT_TOKEN_TO_BE_REPLACED

Anyone lucky enough to bag a place will surely find out at the shoot, but they're going to need to be on their best behaviour. Cav will be locking away the cheap and cheerful Alcopops that fly off the bar on its regular nights; this is a strictly alcohol-free affair.

Still, as opportunities to get yourself on the big screen go, they don't come much cooler than this. Sign yourself up while you still can.