There is a time and a place to go up to movies stars, and this was not one of them

I think we can all agree Ryan Reynolds is a very cool guy. Obviously he’s great at being in movies, but he just seems like a really fun guy to hang around with. He’s always doing dumb stuff online and playing practical jokes, and basically willed the Deadpool movies into existence single-handedly. He’s the sort of guy you just want to be mates with. 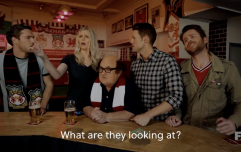 END_OF_DOCUMENT_TOKEN_TO_BE_REPLACED

So it is understandable that if you saw him on a plane, you’d want to go over and get a selfie or something. But obviously, you remember the golden rule of approaching celebrities – don’t be a dick. Be polite, they don’t owe you anything, and don’t go over if they’re eating, or with their kids or whatever.

Reynolds was on The Graham Norton Show this week, to promote Deadpool 2 and he told a story about an interaction with a fan that was somewhat inappropriate. The  guy didn’t really break that rule, but it definitely wasn’t the right time to start stanning.

“There was a couple and they were on a honeymoon… and the woman who had just gotten married just became violently and horribly ill on the plane… It was crazy, and people were freaking out all over the plane.

“So they brought a stretcher down and they’re wheeling her away. Her new husband… he sees me and he’s like ‘DEADPOOL! No way! High five!’.”

Reynolds says he told the guy that he should probably be attending to his seriously ill wife, which is absolutely right. But at the same time, imagine seeing Deadpool on your honeymoon!? How cool would that be!? That’s definitely a story to tell the grandkids.

popular
Woman discovers 'traumatic' truth about engagement ring after Googling fiancé
Dr. Dre shares unbelievable video of Eminem's skills to prove no rapper could beat him
The JOE Friday Pub Quiz: Week 279
'He completely satisfies me' - wife of disabled man hits back at trolls mocking sex life
New Highway Code rule means you should change how you listen to music in car from today
Man tracked down and killed son's paedophile abuser live on TV
'Hey kiddo! This is your uncle ' - creepy moment OnlyFans star's relative finds her page
You may also like
Entertainment
Fans are already calling for a Red Notice sequel
Sport
Ryan Reynolds and Rob McElhenney spotted doing shots with locals in Welsh pub
Entertainment
Looking back at the best Ryan Reynolds tweets for his birthday
Entertainment
Ryan Reynolds returns as Deadpool in MCU in new video
Entertainment
Rob McElhenney makes heartwarming donation to disabled Wrexham fan
Next Page