Marks & Spencers recently removed the gelatine from the Percy Pigs recipe, meaning that they are now suitable for vegetarians.

Of course, this minor change caused Piers Morgan to have a performative meltdown live on morning television.

'Vegans and vegetarians - go and get your own sweets!'@piersmorgan isn't happy with the new veggie Percy Pigs... Have you tried them? pic.twitter.com/zbgCHacfff

"Seriously, go and get sweets that are not called Percy Pigs. Get ones called Kale Nicies. Leave our pig sweets alone, people."

Despite being so horrified by this turn of events, Morgan admitted he had never actually had the original version.

"No, but I'm about to eat them all the time," he said when asked about it by co-host Susanna Reid. "The old fashioned, gelatine ones." 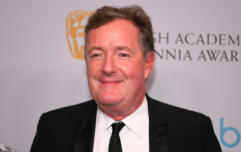 END_OF_DOCUMENT_TOKEN_TO_BE_REPLACED

Morgan then accidentally put one of the vegetarian ones in his mouth - then spat it out with great gusto, exclaiming that it tasted like "like washing up liquid".

He then defiantly ate a fry up on TV, for some reason.

Perfectly normal thing for a normal adult man to be doing @piersmorgan pic.twitter.com/yKM501wnOt

popular
QUIZ: Can you name these forgotten men of Arsenal's 2000s?
Deep fake meme lads sing sea shanty that will make you want to abandon your childhood sweetheart and circumnavigate the globe
Netflix announces new true crime documentary about terrifying LA hotel
QUIZ: Name the films referenced by The Simpsons
QUIZ: Identify which of these 50 players played with Wayne Rooney
The JOE Friday Pub Quiz: Week 226
Rishi Sunak planning one-off £500 payment to benefit claimants
You may also like
News
Piers Morgan says he 'never thought Trump would be capable of inciting a mob'
News
ICU nurse tells GMB intensive care units are 'stretched beyond breaking'
News
Matt Hancock says he will get a Covid vaccination live on TV with Piers Morgan
News
Matt Hancock refuses to say whether he will accept a pay rise or not
Entertainment
Piers Morgan questions easing restrictions for Christmas after other religious festivals were sacrificed
Next Page