People are realising Raven was the UK's original Squid Game

Squid Game is undeniably massive and though people may have already made the Battle Royale/Hunger Games meets Takeshi's Castle comparisons, social media users are pointing out an extremely nostalgic alternative.

Given the competitive gameshow nature of the show in which (spoilers) those eliminated are never seen again, people are casting their minds back to the 2000s and the utterly iconic CBBC show, Raven, which ran from 2002 to 2010.

“Imagine if Squid Game was set in the UK.”

Mate, we HAD Squid Game in the UK. Have any of those kids ever been seen again?? pic.twitter.com/Giojnfz0Rp

Kids who grew up with 2000s telly had all the hits: Jungle Run, Dick and Dom, Fort Boyard repeats, and, of course, the genuinely thrilling experience that was Raven.

If you aren't convinced of the similarities between Squid Game and Raven or haven't even seen the show, watch this little snippet of what we can only hope is a comprehensive compilation:

If I made a compilation of all the best moments from CBBC's Raven would people support this pic.twitter.com/GdbEisp31W

END_OF_DOCUMENT_TOKEN_TO_BE_REPLACED

It's official: Raven was the original Squid Game.

Once one person pointed it out, people online couldn't let it go and hundreds tweeted, "what happened to those kids!?", "they were never seen again!", or something that effect.

But one tweeter, @BaldyBoyan, spoiled the fun, pointing out he was in season one of Raven and is still very much alive.

Clearly a paid stooge so the BBC doesn’t get into any lawsuits pic.twitter.com/Au4PXbidym 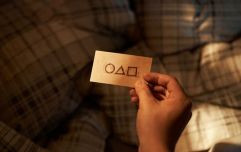 END_OF_DOCUMENT_TOKEN_TO_BE_REPLACED

The show may have ended in 2010 but the BBC did try to resurrect it in 2017 with a different host; sadly it only lasted the one series.

But it seems clear the broadcaster was on to something.

If you need reminding, some absolute legend has put the episodes on YouTube. Now go forth a relive childhood memories.