After years of feuding and wielding guitars at one another, Noel and Liam Gallagher have been offered the chance to compete in a wrestling match.

TNA Wrestling are convinced a few rounds will rid them of their sibling angst - and allow them to finally reform Oasis.

A pledge has been sent to the Gallagher brothers from the American promotors to step inside the ring during their UK tour in January 2016.

(It's a ridiculous notion, but we'll let them have their promo moment).

Speaking to BANG Showbiz, TNA ring announcer-and-matchmaker Jeremy Borash said: "They need to get together in the ring and settle their differences once and for all - and then reunite Oasis. 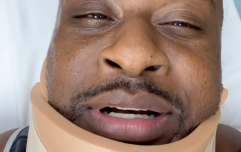 END_OF_DOCUMENT_TOKEN_TO_BE_REPLACED

"We've got to do it in Manchester, I think the crowd would be really up for it, I think it would be an awesome fight. Once it's all over, whatever the result, we want Oasis back touring and making music."

Jeremy has offered to train Noel, 48, and has already come up with a signature move for the guitarist.

He added: "Noel is by far the more talented of the two but when it comes to in-ring skills he's going to need my help. He's a High Flying Bird now so I want to teach him how to do a high flying splash!"