Late on Thursday evening, the trailer for the new live-action The Lion King remake was released. And it looks pretty incredible.

It is just like the classic 1994 animated original, only rendered lovingly in state of the art, 3D CGI imagery.

Only, there is a problem - people keep calling it 'Live action' (we're even guilty of it ourselves).

The thing is, it is not actually live action. There are no humans in the film, and all the animals are computer generated - so therefore, it is animated, not live action.

It is easy to see how people can get confused. In recent years, Disney have had great success remaking their animated classics in live action. Movies like Cinderella, Beauty and the Beast and Maleflicent (based on Sleeping Beauty) have all been massive hits, with famous names playing classic characters IRL. 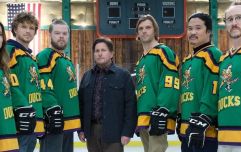 The Mighty Ducks original cast are returning for a reboot

END_OF_DOCUMENT_TOKEN_TO_BE_REPLACED

Then 2016's The Jungle Book had newcomer Neel Sethi playing Mowgli in live action, but all the other characters were CGI animals.

The Lion King simply goes one step further and gets rid of the human protagonist.

The film was shot using advance new technology on blue-screen sets. "We are going to use a lot of virtual-reality tools so it feels akin to what you are looking at [if you were on a real set]," explained Oscar-winning VFX supervisor Rob Legato during a keynote speech in April. "You can walk around the set like a cameraman. [Wearing VR headsets] the actors can now walk into a scene and see the other actors and trees... and because you are in 3D, you get a realistic sense [of the environment]."

And of course, because this is the internet, people just *love* to point out the errors of others.

The Lion King 2019 is kind of false advertising. Live action? Sure tell me again that every single main character isn't animated CGI. pic.twitter.com/fuSsZ6t6LH


I vote for calling it Lion King: Reanimated

Yes, animated. It's animated. Don't neglect the animators. Don't erase their work. This is an animated film. Just like the other one.

The difference between this animated film and the previous also-animated one? The technology (just about) and the style.

To Disney's credit, they have never called it "live action", instead just saying that it uses "technologically groundbreaking" filmmaking.