On November 5 every year the British people celebrate the failure of a man who attempted to blow up the House of Lords more than 400 years ago. That man was Guy Fawkes and he was a part of the Gunpowder Plot to assassinate King James I. 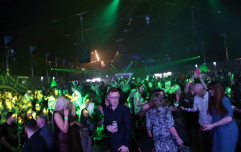 Britain's maddest night out, this is Bongo's Bingo | Out Out

END_OF_DOCUMENT_TOKEN_TO_BE_REPLACED

To celebrate the king's survival, people of London lit bonfires, a practice which quickly spread across the country and was celebrated annually on a day that became known as Gunpowder Treason Day.

Thankfully, it's now known as Bonfire Night and things are a little less focused on treason and more on having a wonderful time. We traveled to the town of Lewes, where they have perhaps the best Bonfire Night in Britain, and where they burn effigies of the Pope because why the hell not?

popular
Tourists left 'squealing' as thousands of venomous crabs invade UK beach
Rishi Sunak wants to crack down on degrees that don’t make students rich
Asda slammed for 'embarrassing poorer families' with new product redesign
Runner finishes last in 400m race as penis keeps falling out of shorts
Boris and Carrie put south London home on the market for £1,600,000
Massive piece of Elon Musk's spacecraft lands on farmer's property and could make him very rich
Inbetweeners star Joe Thomas has been in a relationship with his co-star for over 10 years
You may also like
News
Terminally ill man arrested for mooning speed camera to tick off his bucket list
Life
Man attempts to ‘relieve constipation’ by putting an eel up his bum
Food
The definitive ranking of the UK's weirdest fast food from Wigan kebabs to spam fritters
News
KFC themed hotel opens in UK with free chicken delivered to your room
News
Tory MP demands a portrait of the Queen 'in every home'
Next Page